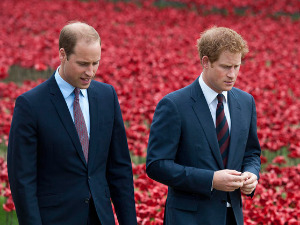 William and Harry separated at their grandfather’s funeral

Protocol the funeral of Prince Philip it was established on Thursday and it was finally decided that Princes Harry and William would not stand side by side in the funeral procession or during the church service, but between the duke’s eldest grandson, the son of Princess Anne.

Source from Buckingham Palace emphasizes that such a protocol is set it should not be interpreted as if the brothers refused to stand next to each other, although it is said that the people in charge of the protocol had to walk like eggs trying to solve the problem of discord between princes, which flared up especially after the interview Harry and Megan with Oprah Winfrey.

A spokesman for Buckingham Palace resolutely denied all rumors. “This is a funeral … we will not be drawn into this constructed drama. The protocol has been established and it reflects Her Majesty’s wishes. ”

However, some members of the protocol reportedly admitted that the brothers’ quarrel required “a lot of thought and energy” in the office of Lord Chamberlain, who is responsible for the protocol.

“We all walked like eggs so as not to make the situation worse,” one of the officers revealed, “Although, to be honest, both William and Harry made it clear that they wanted to focus on mourning Grandpa and did not want to think.” about their disagreements ”.

The Palace insists that the arrangement of the members of the royal family behind the coffin was determined primarily by “blood kinship in old age”.

On the at the head of the funeral procession which will accompany the “land rover” with the coffin of Prince Philip, will be the duke’s two oldest children, Prince Charles on the right and Princess Anne on the left.

They will be accompanied by Prince Andrew and Prince Edward. Then follows the next three grandchildren of Prince Philip, William in the column of “older brother” behind Charles and Andrew, while Harry will be behind Princess Anne, Edward and Anna’s son Peter, who is older than William, but not the direct heir to the throne.

To Harry’s right will stand the grandson of Princess Margaret, the sister of Queen Elizabeth II, and behind him Vice Admiral Sir Tim Lawrence, Princess Anne’s husband.

Due to the alleged tensions in the family, the queen made the decision to change the dress code for this occasion.

It is customary for family members to wear honorary military uniforms at the royal funeral ceremony – which will not be respected this time. This is allegedly a concession to Prince Harry, who was deprived of all military titles after withdrawing from the royal family.

Prince Harry came out of the obligatory quarantine last night upon arrival from the United States, and this will be the first meeting of the brothers after more than a year.

Overseas volunteers within the Serbian military (1): Brotherhood from the ditch