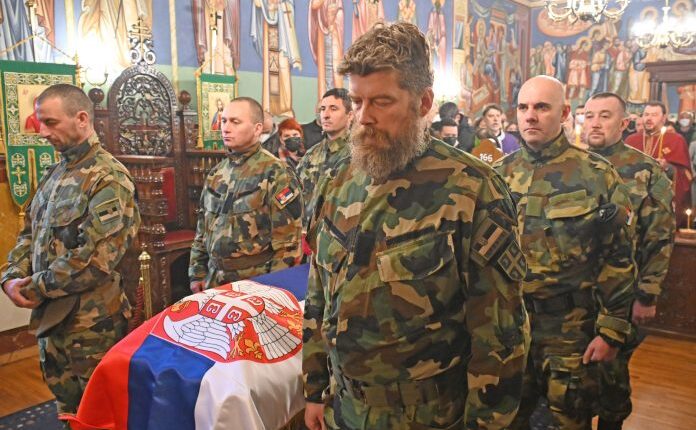 Overseas volunteers within the Serbian military (1): Brotherhood from the ditch

On March 22 this year, Serbia said goodbye with the highest military honors to Albert Ahsarbekovic Andiyev, one of the Russian volunteers who participated in the defense of Serbia in 1999. Speaking about the former Vladikavkaz wrestler who lost his right eye in Kosovo, the deputy commander of the legendary 549. motorized brigade of the Pristina Corps, General Stojan Konjikovac said that Andi’s new Serbian colonel Nikolai Nikolayevich Rajevski – a Russian who left his heart in Androvac in 1876, in the fight against the Turks, and then was the inspiration for Leo Tolstoy for the character of Count Vronsky.

In the history of Serbia, the names of other foreign volunteers who were with the Serbian people during the 20th century when it was most difficult for them were written in golden letters.

However, no matter how astonishing it may seem, the question of the role and number of foreign volunteers in the Serbian army during the last century is still an unexplored area.

Only a few historians have dealt with this topic, but dealing exclusively with certain segments, mostly from the Great War.

Dr. Milan Gulić, senior research associate at the Institute for Contemporary History of Serbia, says that foreign volunteers in the Serbian army were recorded during the First Serbian Uprising, but that to date no single list of volunteers who fought on the side of Serbia in the last century has been made. nor a single list of victims of these wars:

– The volunteer issue has become an integral part of Serbian warfare in the modern era since the First Serbian Uprising. At that time, Serbs from those parts of the Serbian ethnic area that were not affected by the uprising joined the insurgent army. The insurgent artillery was organized mainly by Serbs from the area of ​​today’s Vojvodina, that is. citizens of the Habsburg Monarchy. During 1806, a significant number of volunteers from the Drobnjak tribe in Old Herzegovina joined the Serbian insurgent army, in 1808 515 soldiers deserted from the Austrian army and joined the insurgents, and in the same year about 800 Bulgarians were admitted to the insurgent ranks.

In the Serbian-Turkish war of 1876-1877. thousands of volunteers fought, our interlocutor notes.

– In the Volunteer Corps of the Drina Army, which numbered about 1,200 members, the majority were Serbs from Austria-Hungary, but there were also about 30 Italians, several Germans and one Dutch woman, who wore a Montenegrin hat, rode, smoked, drank and fought. be like a man. In the same period, about 4,300 volunteers from Russia arrived in Serbia, who fought in the Moravian direction – this historian points out.

One of the most famous volunteers in the Serbian army without a doubt is Rodolphe Archibald Rice, a Swiss forensic scientist and professor of criminology at the University of Lausanne. Although he formally came to Serbia in 1914 at the suggestion of the then government to investigate the crimes of the Austro-Hungarian, German and Bulgarian armies against the civilian population, Rice fell in love with Serbs and Serbia so much that he first went through the ordeal of crossing Albania with the Serbian army. breakthrough of the Thessaloniki front.

When he died on August 8, 1929, he was buried with the highest military honors and a funeral service attended by as many as 15 priests and one bishop. His wish to have his heart taken out and buried on Kajmakcalan was also fulfilled. It was written on that urn: “Here in this urn, at the top of Kajmakcalan, the Golden Heart sleeps, the Friend of the Serbs from the most difficult days, the Hero of Justice, Truth and Law, the Swiss Rice, to whom” may glory be. ” There is no information on when and how this urn disappeared.

He left an eye on Kosovo

Albert Ahsarbekovic Andijev was born in 1970 in Vladikavkaz and comes from a famous wrestling family in which Soslan Petrovich Andijev’s uncle is a two-time Olympic champion. Andijev joined the Yugoslav Army on March 28, when he arrived in Serbia by train from Moscow. He was soon transferred to the very border with Albania, took part in the epic battle at Košare, and then at Pastrika. He was left without a right eye in the fighting with the KLA on May 5, 1999, in the village of Budakovo near Suva Reka. The wound had not yet healed when he returned to Kosmet to help his friends and take part in the fighting on Pastrik. In his honor, near the Youth Center in Belgrade, Sremska Mitrovica and Odzaci, a mural was painted with his image and a quote according to which he inscribed himself in eternity:

“I did not lose sight of her. I left him there, so that when all other reasons disappear, at least I have that reason to return to holy Kosovo and Metohija and look for an eye. “

– Russian General Mikhail Chernyayev had command over the entire Moravian army. A Russian volunteer, Colonel Nikolai Rajevski, who served as the inspiration for Leo Tolstoy as the character of Count Vronsky in the classic work “Anna Karenina”, also died in the battles around Aleksinac – says Dr. Milan Gulic.

Tomorrow – Foreign volunteers in the Serbian army (2): Friendship for eternity

William and Harry separated at their grandfather’s funeral