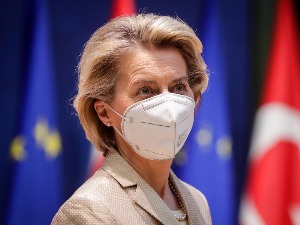 I felt harm and lonely in Ankara

“I am the first woman president of the European Commission. Since I am president, I expected to be treated accordingly when I was in Turkey, but that was not the case,” Von der Layen told EU MPs, AP reports.

Von der Layen added that she could not find an excuse because of the way she was treated during a visit to Ankara.

“The only thing I can conclude is that it happened because I’m a woman. Would this have happened if I had worn a suit and tie,” she asked.

She did not publicly blame Erdogan or Michel for the inconvenience, but said she did not see chairs missing at previous similar meetings.

“I felt hurt, just, as a woman and a European. It’s not about a seat or protocol. This speaks to who we are at the core. This touches on the values ​​the Union stands for and shows how far we need to go before than women start to be treated equally, every time and everywhere “, the President of the EC assessed.

Von der Layen and European Council President Charles Michel recently met with Erdogan in Ankara over tensions between the European Union and Ankara, and there were two chairs in the cabinet, for Erdogan and Michel, while Von der Layen stood next to the men and expressed astonishment at “hm” sound, which signified disappointment, adds the AP.

Then she sat on the sofa and was away from her interlocutor.

President of the European Council Charles Michel said he suffers from insomnia because, he said, of his shame over the incident over the seating schedule at a meeting in Ankara.