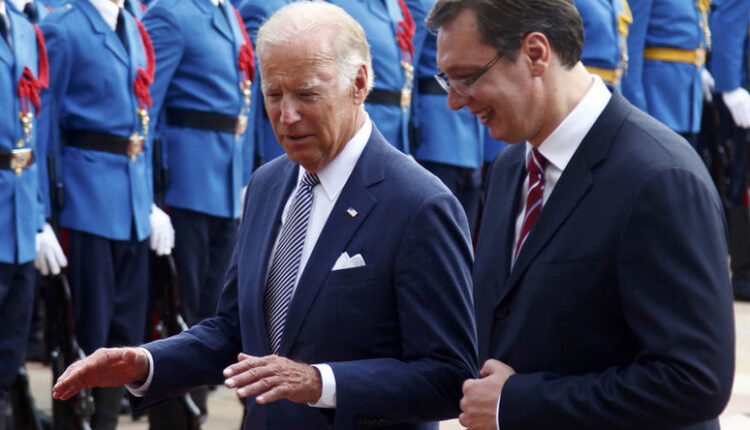 US Vice President Joe Biden visited Belgrade, Serbia on Tuesday. He called for the “normalization” of relations between Serbia and Kosovo – its breakaway province, which declared independence in 2008 – which Washington and Brussels see as a prerequisite for the accession of both states to the European Union.

Serbian Prime Minister Aleksandar Vucic welcomed Biden and said he saw the vice president as “a friend of Serbia” and his personal friend. Biden was an outspoken advocate of U.S. intervention against the Serbs in the 1999s, including the 1999 NATO bombing of Belgrade.

On Wednesday, Biden called for “reconciliation” in Kosovo between Serbia and the province, which was separated from Serbia by US intervention, saying it was “crucial to move forward with their full integration in Europe”.

RT: What do you personally think of Biden’s visit to Serbia in view of his statements from 1998 and 1999 about the country and the Balkan war?

Srdja Trifkovic: This is not Biden’s first visit to Serbia since these statements – he actually visited Belgrade in May 2009. Already at that point, some people said it was inappropriate for him to make the visit as he was collectively demonizing the Serbs as a nation in the 1990s. However, the president – Boris Tadic at the time – was strongly pro-Western and the issue was of course not brought up.

There is a continuity of this policy under current Prime Minister Aleksandar Vucic, who is now in his second mandate and insists on the elusive European path for Serbia, which involves submission to the wishes of both Brussels and Washington. So I think it’s only people like Vojislav Sheshelj and the Radical Party who actually went out of their way to demonstrate against Biden. Most ordinary Serbs remember what Biden said, both during the wars in Bosnia and Croatia and later during NATO’s intervention in Kosovo. But ordinary Serbs have no way of expressing their views, and the government treats Biden as a VIP at the highest level.

RT: Why do people in Serbia and the government feel differently about the visit?

ST: First of all, Vucic insists that Serbia will look ahead, not dwell on the past, and that is exactly what American officials and diplomats have encouraged Serbia to do. In other words, the past is the past, including NATO bombing. At the same time, I believe that behind closed doors, Biden also insisted that Serbia must weaken its relations with Russia in order to continue on this path of EU accession in an indefinite future. He also insisted on what is euphemistically known as the normalization of Belgrade-Pristina relations, which is de facto recognition. He will never say openly that the US insists that Belgrade recognize Kosovo as an independent state. But that is the content of his statements.

Finally, we must not forget that a month ago the government of Prime Minister Vucic welcomed two prisoners from Guantánamo, Serbia, as a gesture of goodwill to Washington. So I think Biden came for all of the intense and purposeful purposes, not to equate with Vucic, but to tell him what Washington’s expectations are for Belgrade in the period ahead. In this context it is important that [Russian] Prime Minister Medvedev is coming to Belgrade in the first week of September. So Serbia will face two very different views on its future foreign policy and the alignment in the Western Balkans.

RT: You once mentioned that Serbian officials give Biden a warm welcome because they want to hurry on to the EU. But what does Biden have to do with the EU?

ST: Indeed, Biden said the US was instrumental in opening the last two chapters in Serbia’s negotiations with the EU – chapters that had been temporarily suspended due to Croatia’s existence. Washington is more than able to press certain buttons, which then have their echoes and reverberations both in the Balkans and in Brussels.

Second, Biden also said that during his brief talks with Vucic he referred to Serbia’s standardization of weapons and equipment with NATO, which is a significant statement considering that Serbia signed an agreement last February that was given to NATO – Staff de facto granted diplomatic immunity to Serbia. These are all quite worrying developments. When Biden praises Serbia’s European path, he is effectively saying that he is satisfied with Serbia’s policy of capitulating to the most important issue of all, the status of Kosovo.

The statements, views and opinions expressed in this column are solely those of the author and do not necessarily correspond to those of RT.