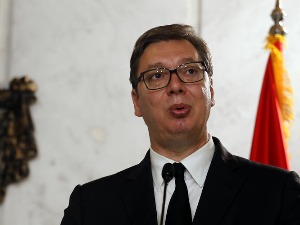 Within the UAE and Bahrain on the event of cooperation

Aleksandar Vučić pointed out that these were “important conversations for us, because we have a conversation with friends first”.

“The Emirates and Bahrain sent huge aid during the pandemic. Although we had almost no relations with Bahrain, and they were wonderful and sent a plane full of equipment,” Vucic explained to Pink.

He pointed out that the entire capital of Bahrain, Manama, is decorated with Serbian flags.

He also stated that it is a special part that Sheikh Mohammed postponed this visit, because tomorrow is his birthday, and Israeli Prime Minister Benjamin Netanyahu will also be there.

He said that there are many topics that will be discussed, and that the first will be the conversation about the expansion of trade cooperation, and explained that the Minister of Agriculture, Branislav Nedimović, is with him in the Emirates.

“We export apples, raspberries, strawberries and many other fruits,” said Vučić, adding that the market of the Emirates is demanding and that it requires a special package of 18 kilograms with about 120 fruits.

These, as he says, are smaller fruits that would be second class in our country.

“We have big projects with them from Belgrade to Al Dahra, a large agricultural combine that is preparing for new investments,” Vucic pointed out.

He emphasized that the topic will also be a new green agenda for Serbia, cleaner air for the citizens.

In this regard, they will discuss renewable energy sources, so that we have more green energy on our market, and as little coal as possible. He announced that Minister Nedimović would sign a Memorandum of Understanding with Bahrain.

He stated that he hopes that the highest representatives of the Emirate and Bahrain will soon be able to be hosted in Belgrade, because they are big players on the global level.

He stated that he would also discuss vaccination in the Emirates, adding that the number of vaccinated people must be further increased in Serbia.

“They are the first or second country in the world to be vaccinated. They are very disciplined and there is no one who moves without a mask. They have four vaccines and they all get vaccinated. Conspiracy theories obviously work best in Europe, especially in the south. But we will fight, because there are many responsible people who understand the problems we are facing, “Vucic said.

He also pointed out the problem of the presence of the British strain of coronavirus, stating that it causes higher mortality, and in Serbia its share is already 35%.

“It is a real miracle that we do not have a larger number of dead, but that is the result of vaccination,” Vucic pointed out.

The action against crime will be long-lasting and sharp

President Vučić stated that in the phones of criminals in the investigation against Belivuk’s group, “another body was found and preparations and various miracles, downloading video content from abroad, and how human flesh is cut and heads cut off”.

It was logical, he adds, that they have strong support if it lasted a year or two.

He states that many thought that they were the state and that they could do whatever they wanted.

“The second question is – do you really think that people who have hundreds of millions of euros, that they are ready to let one man destroy them. No, they will do everything and they did everything with certain people that I appointed to certain functions, to destroy life to my family, children, the most heinous lies “, the president pointed out.

Today, he says he knows everything, “at some point I even ran away from hearing the truth, because I didn’t want to believe it.”

“I did not trust some of the people close to me who warned me. Those who do not know me made a mistake in their assessment, and there is always a foreign influence. It does not work and it cannot do without it,” Vucic emphasized.

When asked what the message is to those he elected, he states that he believes that there is no living person who does not make mistakes.

“I also made a million mistakes, but I always fought and pushed the country forward. I managed to strengthen Serbia during my mandate. The party I lead, whether I personally or not, we will all have to pay the bill to the people. The action will to be long-lasting, serious, sharp and the full commitment of the state will be shown “, noted Vučić.