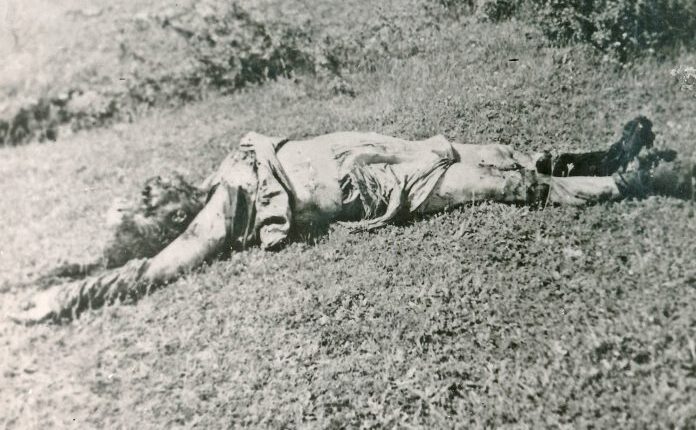 Lazar Orozovic, a tailor from Pakrac, is one of the few people who managed to escape from the death camp.

He found himself in the hell of Jasenovac shortly after the Ustashas arrested all the men from Pakrac and Lipik on the night between December 23 and 24, 1941. In the morning, everyone ended up in freight cars for the “death factory”. His group ended up in a part of the camp called Bacic’s brickyard. The horror started right away.

Horror in the brickyard

“In Bačić’s brickyard in front of the Ustasha office, they lined us up in two rows. An Ustasha lieutenant named Ljubo, whose last name I do not know, greeted us with the Ustashas and angrily shouted: ‘Why do I have to kill all Serbs, there are more camps in Croatia.’ After that, the Ustashas conducted a thorough search of us and confiscated all our money, rings, watches, tobacco doses and all the things they found in our country. After that, the Ustashas ordered the rest of us, who were standing in line and watching this, to call those who are from Lika, and then they called: Šepelj Mane, Šakić Luka, Marković Rade, Labus Marko, Bogojević Đuro, Pokrajac Stanko, Gavrilović Lazo and Šušnjar. The Ustashas took them out of the machine and slaughtered all of them in front of our eyes. The slaughter was carried out personally by the Ustasha lieutenant Ljubo and several other Ustashas. The victims were standing, and Lieutenant Ljubo and the Ustashas were brandishing long knives at the victims’ necks and cutting their throats. As they cut someone’s throat, he fell to the ground covered in blood. The rest of us had to stand still in the machine and watch this slaughter of our comrades. Other Ustashas, ​​who did not perform the slaughter, stood and watched us, so the one who could not watch the slaughter was separated from the machine and handed over to Lieutenant Ljubo for slaughter. That is how they were singled out and immediately slaughtered: Blanuša Đuro, Radaković Đuro, Vukobradović Ljubiša, and Šrklić Mirko “, Orozović recalled.

He went mad with horror

“Among them, Divjak Joco was singled out. He then told Lieutenant Ljubo that his cousin was a deputy prefect. Lieutenant Ljubo told him then that he needed just such people. He then ordered him to lie down on the slaughtered Serbs and show where his heart was. The savage did it. Lieutenant Ljubo then sat on Divjak’s legs, and one Ustasha then sat on his head, while the other two knelt beside him, each on one side and took out his heart alive with knives. The Ustasha, who took Divjak’s heart out, held that heart in his hand and showed it to us, telling us: “Here you see how the Ustashas know how to beat.” During the described slaughter, Lieutenant Ljubo and other Ustashas drank brandy, which was brought to them in a bottle by a Jewish prisoner. The slaughter lasted for about 2 hours and during that time the Ustashas drank 3 bottles of brandy “, Orozović testified and stated that 32 people were slaughtered at that time, and that Simo Arbutina, a notary from Čaglić, immediately went crazy from the horror he had to watch. when the Ustashas quickly took him in an unknown direction and never saw him again.

Lazar Orozović was in Jasenovac until January 4, when he was transferred with a group of Serbs to another camp – in Stara Gradiška.

“On the same day, a group of Serbs was formed in Jasenovac in the camp, about 80 of them, who were once expelled by the Ustashas without things. They said they were taking them for a brush. Afterwards, in Stara Gradiška, the Jews – detainees – told me that this group of Serbs had been killed in Stari Jasenovac, “this witness said.

Escape from the camp

Lazar Orozović used the opportunity that presented itself to him on January 15, 1942, when he was unloading a potato wagon with two other Serbs and three Jews at the train station in Okučani.

“Before that, the three of us agreed that we would try to escape in any way. When we were done unloading the potatoes, the Ustashas came in two buses, which were going somewhere, and they stopped at the train station and started talking to the Ustashas, ​​who were guarding us. The three of us seized this opportunity and fled without anyone noticing us from the Ustashas. I immediately separated from Radić and Milaković and went through the forests to the Pakrac section, and they remained in the forests, where they are probably still found. I stayed in various villages of the Pakrac district until April 19, 1942, when a friend of mine from Zemun, a Croat, came to pick me up and brought me a pass in someone else’s name. While staying in the villages of the Pakrac district, I hid from the Croatian authorities and the Ustashas so that they did not notice me, “he told the Commissariat for Refugees and Immigrants of the then Serbian government shortly after he crossed from Zemun to Belgrade on April 21 with a fake border map.

Tomorrow: Eight decades since the establishment of the Jasenovac camp – unpublished testimonies (17): Murder of 500 women and children

Within the UAE and Bahrain on the event of cooperation

SLAĐAN RECEIVED TWO DIFFERENT VACCINES AGAINST KOVID! He says he has been within the media all his life, so now he would not thoughts UNEXPECTED POPULARITY ?!