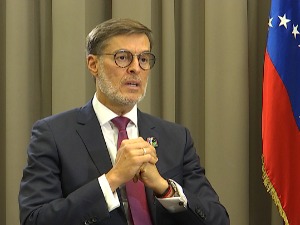 We’ve got the most important oil reserves on the earth, however we reject imperialism

The forces in the international ring are increasingly measured through the energy crisis. The focus is on the largest producers of oil, gas and other energy sources – including Venezuela. Felix Placencia, the head of Venezuelan diplomacy, talks about energy sources as geopolitical means and the challenges facing Venezuela – in an exclusive interview for RTS.

At a time of global energy crisis, Venezuela, which is under Western sanctions – is increasingly in focus because of its oil. Is it easier to resist sanctions now that the world is crying out for oil and energy?

– We are not isolated. We tolerate illegal unilateral measures by American government institutions and our people suffer. But the government of President Nicolas Maduro has not stumbled – despite years of interference in our internal affairs, attempted coups, blocking our oil industry, organizing anti-government protests.

Venezuela has had an oil industry for more than 100 years. We have the largest oil reserves in the world. Even before independence, our oil industry was focused exclusively on one market – the US, which is large and important.

President Hugo Chavez has decided to make our business more diverse, and to do business with Serbia, China, Russia, Iran, the Middle East, Malaysia, Indonesia … We are defending our right to cooperate with other partners. We do not accept imperialism

You used to produce two and a half million barrels a day, and now five times less, due to sanctions, lack of investment. Can you renew the previous production volume with new partners – Russia, China, Iran?

– Yes, but it doesn’t happen overnight. First of all, it takes a lot of investment, time and infrastructure development. We have resources, energy, human resources, friends in the world. Among them are the Serbian people and the Serbian government.

Are there any signs from the Biden administration that America is changing its position on Venezuela and President Maduro?

– Maduro congratulated Biden on the election, we hope for better relations, with mutual respect. We are a sovereign country. We want to talk to America about all issues.

What would be a win-win in that relationship?

– Win-win would be respect for our sovereignty, because there is business interest on both sides. The American market is large. We are in the same region. Venezuela has a lot of resources – not only the largest oil reserves, but our natural gas reserves are among the largest in the world. We also have minerals, large reserves of gold, water resources for 10 times the population, arable land.

– That’s the wrong view. We have the right to cooperate with everyone. You mentioned Iran, with which we have strong ties in OPEC. We also have close ties with France, but we reject imperialism

There are many challenges facing Venezuela, such as economic and political reforms. In the upcoming regional elections in Venezuela, will there be changes in the election rules and adjustments to Western requirements?

– Our election law is one of the best in the world, it was approved in a referendum and voted in parliament. We don’t have to ask anyone in the world if it’s good or bad.

– You say that Serbia is Venezuela’s best friend in Europe. We are deeply grateful to Venezuela for its principled support to Serbia on the issue of Kosovo and Metohija.

Venezuela feels very close to Serbia, because it connects us a lot. We know how much you have suffered, but also how much you are capable of building a better society and economy. You are stronger now. Venezuela will always be committed to the political interests of your people, your government and Serbia.

The longer term that’s coming: Alkaras is the winner of Nextgen

Three glamorous particulars by no means exit of trend