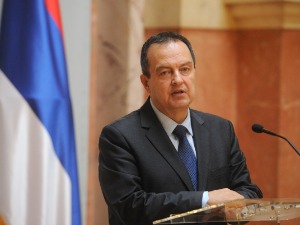 Vučić is a joint candidate of SNS and SPS for president

We will have one joint presidential candidate and that will be Aleksandar Vučić, said the President of the Assembly of Serbia and the SPS, Ivica Dačić, and added that it was “quite logical”.

“Last time, Vučić was our joint candidate, we will support him again if the SNS proposes him, we cannot support another, otherwise we will have our own candidate,” the SPS president emphasized in the show “Tačno tako” on Tanjug television.

He also mentioned that it would be “politically incorrect and unthinkable” to run against Vučić.

As for the joint list in the parliamentary elections, Dacic said that it depends on the reaction of the electorate, that these are serious analytical issues – in terms of what will bring more votes, and that advocating for a joint list is not advocating for the SPS to drown in the SNS. and the question of ideology, but whether it is more logical if the presidential candidate is already joint.

Dacic also emphasized that if the SPS and SNS go to the polls with one list, then it will be at the national level and at the level of Belgrade, according to the same principle, but there is still talk about that.

He also stated that during the nine years of the coalition, there were no different attitudes with Vučić, that they were proud of everything they did together, and that a decision was made to continue cooperation, and that now the focus is on defining the manner of that joint performance in the elections.

“Opposition will go to the polls”

The president of the SPS thinks that his party has no reason to be afraid of entering the Assembly, since it had 10.5 percent in the last elections, emphasizing that the SPS is currently the second strongest party in Serbia.

Dacic also spoke about the opposition and said that he was not worried, because, as he stated, “a government that has such an opposition does not have to worry about its future.”

He is convinced that the opposition will go to the polls, but he does not know how he will participate in them. He adds that, in his opinion, there is nothing from the boycott – regardless of whether any of the parties accepts the results of the Round Table.

Speaking about the date of the referendum on changing the Constitution, Dacic said that it is planned for January 16 next year.

He specified that it was not a fixed date, but that there was not much space, since that work must be completed by this convocation of the parliament.

He explained that everything is related to the date of the elections on April 3 and their announcement, which must be preceded by the dissolution of the Assembly approximately 45 days before the vote, which with all the procedures that follow after the referendum gives January as the last deadline for that job. the Law on Referendum must be passed.

Regarding the remarks why the Law on Referendum changes the census for the turnout of citizens, he said that it seems to be in order to harmonize with the Constitution that was adopted in 2006.

“The plan is to adopt the Law on Referendum in the Assembly on November 25, and on November 30 the text of the amendment to the part of the Constitution that is being changed, some thought it would be November 29, but I did not want it to be tied during socialism, and then a referendum on January 16, “Dacic stressed.

What Is Serbia’s Vaccination Technique?

Serbian Officers Tuning Up For Putin’s Go to To Belgrade