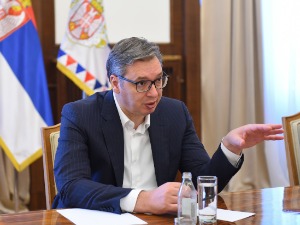 Vučić for Klein Zeitung: We are going to produce Chinese language and Russian vaccines

Aleksandar Vučić told Klein Zeitung that resistance to coronavirus vaccination is obviously universal, and not a problem of only one country.

"Why this is so – I do not understand. However, conspiracy theories and negative messages obviously reach better than positive ones. Social networks also play a role in that, as well as the fact that people see their freedoms in unreasonable attitudes", Vučić explained the reasons why vaccination slowed down in Serbia.

He also pointed out that Serbia, when it comes to environmental protection, will respond to the problems with a serious policy, but that, as he said, it will not give up on the industrialization of the country.

When asked how Serbia treats the topics of environmental protection, he pointed out that this topic is becoming increasingly important, because people in Serbia see that the standard of living is growing, that new factories and roads are being built.

"The question is whether this is really the most important topic or just one important topic. It is also a matter of political abuse. We will respond to this with a serious policy, which means improving air and water quality, in which we will invest a lot of money.", explained Vučić.

He reminded that plan "Serbia 2025" envisages that more than 120 municipalities will be connected to the sewerage network, as well as that wastewater treatment plants will be built in all cities, and that asbestos pipes will be removed from the water supply network.

"We will do all that, but I will not participate in the deindustrialization of Serbia. We want even more industry and factories and we must find a middle ground between environmental protection and the economy, but not at the cost of our economy not growing further", said Vucic.

Asked about Serbia’s European path and how he views the fatigue from EU enlargement, Vucic said that EU foreign ministers pointed out at a recent meeting that Serbia was making progress on the rule of law, adding that it was always not enough.

"We have also raised the harmonization with the EU foreign policy from 46 to more than 62 percent. I believe that by the end of the year, we will open certain clusters according to the new approach methodology. But it is important for us to know that we are sincerely on the European path. However, we must also look at our economic growth and we cannot wait until the mood in the EU changes. We want to do everything to become an EU member and we have no other way, but because of that we will certainly not have bad relations with Russia and China.", said Vučić.