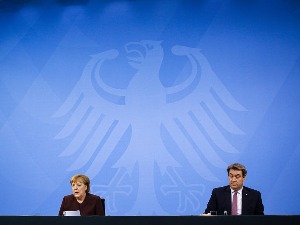 Through which path will German international coverage go after Angela Merkel

“The federal chancellor is expected to be experienced in foreign and European politics,” the new president of the Christian Democratic Union (CDU) and North Rhine-Westphalia’s prime minister, Armin Laschet, told Reuters in early February.

In that way, he wanted to show himself as someone who has an advantage over his rival in the fight for the chancellor’s candidacy.

However, the Bavarian Prime Minister and President of the Christian Social Union (CSU), Marcus Zeder, quickly retaliated. He announced that he had talked with French President Emanuel Macron for exactly three quarters of an hour and that he had established that there were “great coincidences” in his views.

The conversation in English was, among other things, about joint projects in air traffic and the planned European fighter plane.

Given that Bavaria is the seat of important companies that deal with military and civil air traffic, Zeder thus collected points in both foreign policy and foreign trade. Prior to that, in October, he advocated a more active role of Germany in foreign policy.

The bigger role of Germany

This is just one example of how the two politicians who would like to become chancellors position themselves before the conservatives from the CDU and CSU make a decision on who will be their candidate for the position of the first man of the German government in the federal parliamentary elections at the end of September. A decision on that should be made by May 23.

Johannes Farwick, a professor of international relations at the University of Halle, points out that it is not an easy task for Lashet and Zeder.

“Any successor to the chancellor, who has a decade and a half of foreign policy experience and who has been hardened through numerous crises, will have to learn to play that role. At the same time, Germany’s weight on the international scene has increased significantly in recent years. “On the contrary, the shift will increase the pressure for him to position himself on key issues,” Farvik said.

Lashet has more experience in foreign, and especially European, politics. He grew up in Aachen, near the border of Germany, Belgium and the Netherlands. And very early on, he developed an awareness of how important cross-border cooperation is.

During the pandemic, Lachet also defended the open borders as the Prime Minister of North Rhine-Westphalia. From 1999 to 2005, he was also a member of the European Parliament, where he dealt with foreign and security policy. And he has always advocated for more courage in European integration.

Markus Zeder has no such experience. Professor Farwick says of him that on the issue of European policy, “a sheet of paper has not yet been printed.”

Torsten Benner, head of the Berlin Institute for Global Public Policy, goes even further. Zeder “has little or no emotional connection to the European project and will not refrain from opportunistic agitation against Brussels, if it seems politically useful to him,” says Benner.

The transatlantic renaissance will not be free

What both politicians have in common is that they want to concentrate more on the European Union and France than on the United States.

In 2003, as the president of the CDU, a party that was in opposition at the time, Angela Merkel demonstratively traveled to Washington and supported George W. Bush in the war in Iraq, although the vast majority of Germans, including the Federal Social Democratic (SPD) Chancellor Gerhard Schroeder, strongly opposed it.

During Trump’s four years, transatlantic relations were difficult. “America has always been a country of freedom and democracy for us,” Lachet recalled with regret in his speech during his candidacy for the post of CDU president. Lashet was referring to the intrusion of Donald Trump supporters into the Capitol building in Washington in January 2021.

Zeder also recently admitted that during Trump’s mandate, his love for America was difficult to test.

Both now have high hopes for the new US President Joseph Biden. He told partners at a recent virtual Munich conference on security: “The Transatlantic Alliance is back.”

But Biden’s rapprochement with Europe is not unconditional. For example, he, like his predecessor, demanded that the partners increase their defense spending and take greater responsibility in security policy.

Zeder agrees in principle, but emphasizes: “We are not children – we are partners, not vassals or subordinates.” Zeder stated that to the AP news agency a few days ago. Lachet also supports NATO’s goal for members to set aside two percent of their GDP for defense, which Germany is still far from.

Zeder: A balance between interest and value

The obstacle to the renaissance of transatlantic cooperation is German policy towards China and Russia. It seems that Biden, like Trump before, thinks that Berlin is too lenient towards the governments of those two countries due to trade interests.

In that respect, certainly nothing will change even if Lachet or Zeder becomes chancellor. True, Lashet recently spoke about the “competition of the system” between the West and China, but at the same time he did not want to rule out the possibility that the Chinese concern “Huawei” participates in the construction of the 5G mobile network, which Washington is very critical of.

Zeder said in an interview with China last summer about the ZDF public service: “The biggest challenge for German foreign policy in the coming years, it seems to me, will be finding the right balance between interests and values.” That is not the firmness that Washington expects.

As for Russia, both Lashet and Zeder are against the suspension of the construction of the Nord Stream 2 gas pipeline, which is demanded by Washington.

Lashet also wants the assassination of Russian opposition politician Alexei Navalny – which he strongly condemns – to be clearly separated from the issue of gas trade.

With his visit to Moscow a year ago, Zeder continued the tradition of the Bavarian prime ministers to pursue their own Bavarian-Russian trade policy, which is not burdened by differences in political opinions.

Performance on the international stage

Political analysts do not expect a significantly different foreign policy from the one pursued by Angela Merkel, regardless of whether the new chancellor will be Lashet or Zeder.

On the contrary, Torsten Benner sees in both of them a tendency to continue the current policy, where, he believes, they will encounter obstacles.

“On the one hand, because Angela Merkel’s course cannot continue just like that, because of contradictions. And on the other hand, because a possible coalition partner, especially if it is the Greens, will insist on changing the course of foreign policy. to China’s policy because the chancellor’s one-dimensional automobile foreign policy has done enormous damage to Germany, “Benner said.

“Both are political professionals who have not had a foreign policy focus so far. (…) But both will surely quickly discover how important foreign policy is for the chancellor. Lashet has more foreign policy experience than Zeder, but both are well networked on the international stage and both are equally capable of performing on that stage, “Farwick concludes.

The face and reverse of humanity in Serbia (4): The Aristocracy as remedy