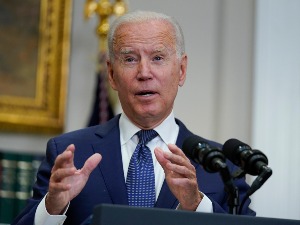 The scenario in Afghanistan is altering daily, the safety zone across the airport has been expanded

Joe Biden is addressing the nation situation in Afghanistan, said the army continues to evacuate people from Kabul, Reuters reports.

He stressed that the priority is for American citizens to leave Afghanistan as quickly and safely as possible.

However, he emphasized that the US Army is also working on the evacuation of Afghan partners and citizens of allied countries.

He says the U.S. military has expanded the security zone around the airport and that the Taliban are cooperative for now.

Biden assures that the use of civilian planes for evacuation will not affect commercial flights.

The President of the United States warns that the security situation in Afghanistan is changing day by day.

As of August 14, the day before the Taliban entered Kabul, the United States has evacuated 17,000 people, including 2,500 U.S. citizens, but several thousand Americans are still waiting to be evacuated from Kabul airport.

Biden is under great public pressure because the latest research shows that three quarters of Americans think that the withdrawal of American troops from Afghanistan is a bad move, the BBC reported.

Criticism of Biden’s account also comes from the way in which the employees of the American embassy, ​​left until the last hour in Kabul, had to leave the facility, which many compared to the scenes from Saigon in Vietnam in 1975.

The President of the United States is in his previous address pointed out that he stands firm in his decision, although he acknowledged that the situation on the ground was much faster than he and his administration had anticipated.

Katai leaves Zvezda and wears a black and white jersey?