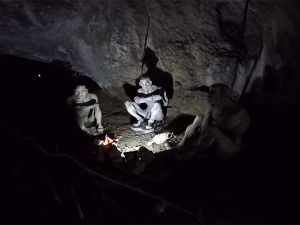 Two new genetic studies have identified three more early human remains whose remains have been found in present-day Bulgaria and whose descendants appear to be still alive, as well as one woman from the Golden Horse site in the Czech Republic, who was among the first to leave Africa. The Great Migration – but its line is clearly extinct.

They all had Neanderthals in their family tree, which reveals our love secret: and not only partially, but quite reliably.

One of the latest studies describes three people who lived in present-day Bulgaria about 45,930 to 42,580 years ago. According to archaeologist Matej Hajdinjak and his colleagues from the Center for Ecology and Evolution, they are among the earliest modern people whose remains have been found in Europe so far.

These first modern inhabitants of Europe lived near the Bacho Kiro cave in Bulgaria. They used the teeth of cave bears to make ornaments, such as beads and pendants. Stone and bone tools were painted with ocher, and fed by hunting.

Although the rest of their presence can be found in the vicinity of the cave, these prehistoric people did not leave much trace. To this day, only one tooth and a piece of bone have survived. However, these traces also contained enough genetic material that scientists can use and discover surprising information about their origin, but also their descendants.

This week, two studies based on genetic sequencing were published, which give us a sketch of the family tree of the oldest known Europeans – three inhabitants of the Bacho Kiro cave, and one skull of a similar age of a woman from the Czech Republic.

The people from the Bulgarian cave are the only ones who have living descendants, in unexpected places – in East Asia and on the American continent. It has also been shown that specimens from the Czech Republic and Bulgaria have a large amount of Neanderthal DNA.

Analyzes on the remains of the inhabitants of the Bacho Kiro cave show that people, after arriving in Europe, mixed with Neanderthals for much longer than previously thought. Yet, despite their age indicating that these individuals were among the first people to settle in Europe, they do not have much in common at the genetic level with today’s Europeans.

Mateja Hajdinjak from the Francis Creek Institute in London, co-author of the research published this week in the journal Nature, states that: “It is interesting that these earliest Europeans from the Bacho Kiro cave did not significantly contribute to the genetic picture of later inhabitants of Western Eurasia.” This group of people seems to have been largely replaced by later migrations in this area. However, they are closely related to the ancestors of the later inhabitants of America and Eastern Eurasia, and even to some current peoples. ”

This research also showed a close genetic connection between these people and Neanderthals. The inhabitants of this cave have up to 3.8 percent of Neanderthal genes, which indicates a much faster mixing of modern humans and Neanderthals than previously thought. Moreover, the genomes show that these Europeans were at most six generations away from their Neanderthal ancestors.

The dead ends of evolution

Unlike the inhabitants of the Bacho Kiro cave, DNA analysis has not yet determined exactly what happened to the group of people to whom the remains found in the Czech Republic belong.

“It seems as if they belonged to some small branch of their own population that originated from people who left Africa about 50,000 years ago. We did not find any direct descendants of this group among today’s inhabitants. The question is, why didn’t they leave any genetic trace? ”Says Kay Prifer, a researcher in the field of archaeogenetics at the Max Planck Institute and co-author of another study published this week.

From a genetic point of view, many human remains from this period point to dead ends in evolution. The woman whose skull was found at the Golden Horse site makes no genetic contribution to later groups of people. The same goes for a 45,000-year-old man found near a village in Siberia, as well as for the remains of “Oasis 1” found in Romania, which is about 40,000 years old.

“Not all fossilized human remains belong to the ancestors of a modern population, or even a population that has left genetic descendants,” said Rick Potts, director of the “Human Origin” program at the Smithsonian Museum.

“It turns out that these ‘dead ends’ are the more common rule than the exception.”