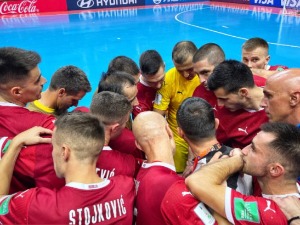 After the introductory defeats from Iran and Argentina, otherwise world champions, Serbia needed a victory, but also a victory with a significant difference.

That is exactly what the players of Serbia succeeded in, because they already had an advantage of four goals by half time.

The shooters were Rakić, Tomić (twice) and Petrov.

By the end, they scored three more goals (Milisavljević, Lazarević and Radovanović), which made them the third among the mentioned four best third-placed teams, with three points won (Thailand and Vietnam have four points, Japan also has three but a goal difference of “+1”) .

The opponent of Serbia in the knockout phase will be the selected team of Portugal. Although our national team was initially informed by the organizers that any victory with five or more goals difference would take it to the match with Brazil, which the Serbian coach talked about immediately after the match with the United States, Serbia’s opponent will be, in fact, Portugal .

Portugal drew with Morocco in the group, while they were convincing against Thailand and the Solomon Islands.

The match will be on the program on Friday.