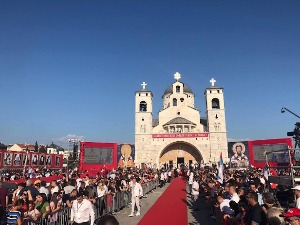 The reception for the Patriarch of the Serbian Orthodox Church, Porfirio, was held on the eve of the enthronement of Metropolitan Ioaniki, in Cetinje.

Citizens came to Podgorica from all over Montenegro. The street leading to the Temple is blocked.

A large number of people gathered in front of the Temple, and there was a column of cars at the entrance to Podgorica from the direction of Danilovgrad.

As announced, after the great evening service at 6 pm, a rich cultural and artistic program will be held on the plateau in front of the Temple on the occasion of the enthronement of the Metropolitan of Montenegro and the Littoral.

The enthronement of Ioannicius was announced for September 5 in the Cetinje Monastery, in the presence of other hierarchs of the Serbian Orthodox Church, headed by Patriarch Porphyry.

Serbian Patriarch Porphyry arrived today for a two-day visit to Montenegro, which is his first arrival since he was elected head of the Serbian Orthodox Church.

Earlier today, a group of citizens broke through the police blockade that was at the roundabout at the entrance to Cetinje and blocked the main road Podgorica-Cetinje.

They set up a barricade made of rubber near the “Belvedere” restaurant.