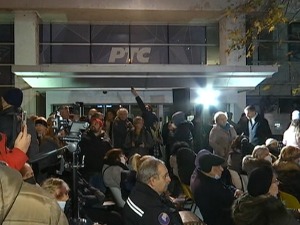 At the protest in front of the entrance to the RTS building in Takovska Street, a video was broadcast in which the organization “Kreni-promeni” warns of the danger of lithium exploitation.

Actors Jelena Stupljanin and Viktor Savić, among others, spoke on behalf of the organizers, among others, Savo Manojlović from the Association for the Protection of Constitutionality and Legality.

“Know that we are defending all those people in Jadro here in Belgrade, but when ‘Rio Tinto’ starts with mechanization, we all have to go, because Serbia will defend itself in Jadra,” said Savo Manojlović.

Organizers said earlier that RTS refused to broadcast the video.

RTS announced earlier today that the advertising declaration provided by the Law on Advertising has not been submitted.