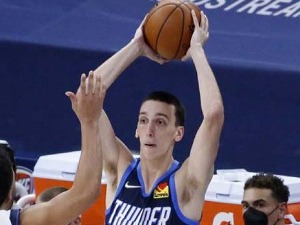 Alexei Pokushevski started the game in the starting five on the visit to Minneapolis and completely justified the trust of coach Mike Degnolt.

He spent 33 minutes in the game and with 13 points and rebounds, he picked up ten more balls under his hoop, which completed the previous defensive performance on 100 balls won in his professional career. He also scored three three-pointers out of a total of 21 that the Oklahoma team scored for the 19th victory of the season.

In the defeated team, two players had a double-double effect, but it was not very helpful. The most efficient player of the match was Carl Anthony Towns with 33 points and ten rebounds, followed by Ricky Rubio with 11 points and assists.

Sacmento also won on the road, beating Cleveland 119: 105, and Nemanja Bjelica modestly contributed with three points scored, with one scored in nine minutes of play.

Until the victory, Sacramento was led by Dearon Fox, who finished the match with 30 points, Tyrese Halibarton, who achieved a career record with 18 points, and Rishon Holmes, with a double-double of 17 points and 16 rebounds.

The away victories were achieved by Charlotte over San Antonio with 100: 97 and Utah over Chicago with 120: 95.

Preview: Serbia vs. Republic of Eire

China has warned the EU and Western nations over sanctions