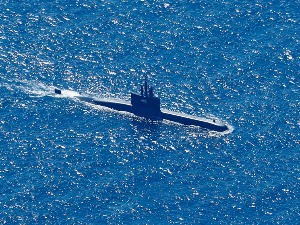 The Indonesian navy changed the status of its submarine from “a missing submarine” to a “sunken submarine” on Saturday, as the remains and items believed to be from the vessel were found.

Indonesian authorities have planned an action to evacuate the crew when they determine the exact location of the submarine, but there is less and less hope for the 53 crew members.

So far, no signs have been found that they could be alive, and it is estimated that they were left without enough oxygen on Saturday.

“All of us Indonesians express great sadness over this tragedy, especially to the families of the crew members,” said Indonesian President Yoko Vidodo.

The warships are deployed at the place where the submarine disappeared and are trying to locate it with radars and metal detectors. The search involved 21 Indonesian warships, submarines and several police and rescue vessels. Two Australian warships are also helping.

The Navy believes that there was no explosion on the submarine, but that the strong pressure on the vessel probably created a crack through which some objects came to the surface.

Bottles floated on the sea surface, part of the torpedo launcher, part of the metal pipe, prayer mats, fuel …

The items believed to be from the submarine were presented to journalists and the public at a press conference.

The remains were found about two miles from where the submarine was launched, before it disappeared, at a place where the sea is 850 meters deep.

Authorities said earlier that the submarine could not survive at depths greater than 500 meters, and a potential evacuation at such a great depth would be very difficult and risky.

The Indonesian military said on Wednesday that it had asked Singapore and Australia for help in searching for a submarine with 53 crew members, after lost contact with the vessel about three o’clock in the morning off the coast of Bali.

The submarine “KRI Nangala-402” stopped answering calls, and this week it was supposed to practice firing torpedoes.

It is one of five submarines owned by Indonesia, built in West Germany in 1979.