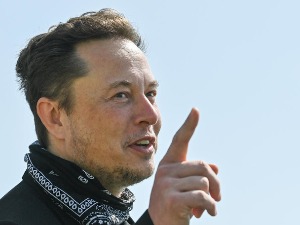 Musk said he would stick to the results of the poll he tweeted, whatever they were. “There has been a lot of talk lately about unrealized gains as a means of tax evasion, so I suggest selling 10 percent of my Tesla shares,” Musk wrote in a tweet, referring to the “tax on billionaires” proposed by Democrats in the US Senate.

The survey received over 700,000 responses in one hour since it was published, with almost 56 percent of respondents approving a proposal to sell shares.

Mask’s share in “Tesla” has reached about 170.5 million shares since June 30, and the sale of 10% of his shares would amount to close to 21 billion dollars according to estimates.

Analysts say he will have to sell a significant number of shares to pay taxes anyway, as a large number will expire next year.

The comments from Mask come after the proposal in the American Congress to tax the property of the billionaire, in order to help pay for the social and climate program of President Joe Biden.

Musk is one of the richest people in the world and the owner of several futuristic companies, including “Spacex” and “Neuralink”. He had previously criticized the tax on billionaires on Twitter.

“Keep in mind that I do not take a cash salary or bonus anywhere. I only have shares, so the only way to pay taxes in person is to sell the shares, “Musk said on Twitter.

Vjosa Osmani’s husband is in uniform once more