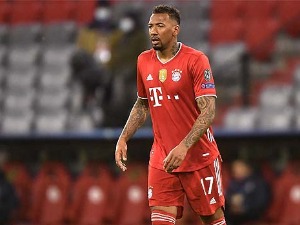 Boateng is responsible of attacking his ex-girlfriend

Jerome Boateng denied that he injured the mother of his twin daughters, during an argument on vacation in 2018, the BBC reported.

However, ex-girlfriend Sherin told a court in Munich that the former Bayern defender hit her so hard that she lost her breath for a moment.

Under German domestic violence law, he could face up to five years in prison.

Ahead of the trial, the prosecution charged him with intentionally inflicting bodily injuries, noting that he threw a lamp and a small fan at his ex-girlfriend during a summer vacation in the Caribbean in July 2018.

During her testimony, the girl said that Boateng hit her, pulled her by the hair, bit her on the head and insulted her during the quarrel.

However, he described a different version of events.

Boateng admitted during his testimony that tensions escalated during the card game and that the two of them quarreled.

He claims that the girl became aggressive and that she insulted, hit and injured his lip.

When he tried to move her away from him, she fell, and then he took a pillow and threw it towards the table, after which the lamp fell to the floor, claims the German football player.

The hearing was supposed to take place in December, but was postponed because the witness could not appear.

Boateng won 22 trophies at Bayern, including twice the Champions League and nine times the Bundesliga, and then moved to Lyon, France this summer, after his contract in Munich expired.

Boateng’s other ex-girlfriend, Polish model Cassia Lenhart, killed herself at the age of 26, in an apartment in Berlin on February 9, according to the BBC.