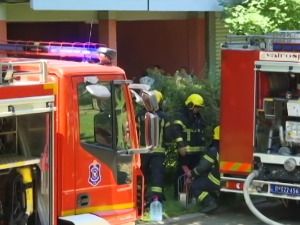 Throughout the day, economists, graphic artists, electricians, firefighters within the night – learn how to change into a volunteer

During the day, economists, graphic artists, electricians, aircraft and car mechanics, in the evening – firefighters. When it gets crowded, members of professional fire brigades are first helped by volunteers from voluntary fire brigades.

“We usually get an invitation from the Fire Brigade Center to go out on the field and help our colleagues from the professional staff. Now, in this summer period, most of them are open fires where there are fires of low vegetation and garbage in landfills,” explains Dusan Jovanovic, volunteer commander. fire brigade “Matica” Zemun.

They are on duty at night, and those who are allowed to work during the day also work during the day. George, although he is a medical technician by profession, has been voluntarily driving a fire truck of the oldest company “Matica” Zemun for two years.

“I decided to do this I can say work, albeit voluntary, out of love for not to say adrenaline, but action to someone, helping people, saving property, and among other things because of love for trucks and equipment in the fire station,” he said. Djordje Jozdic, volunteer of the voluntary fire brigade “Matica” Zemun.

In order to become a volunteer firefighter, it is necessary to pass the training of the Ministry of the Interior for a week and to pass the professional firefighting exam.

“Until a few years ago, ie the adoption of legislation in November 2018, this area was largely neglected and devastated. However, since then, the state and only the Ministry of Interior and the Sector for Emergency Situations stand behind voluntary fire brigades and currently we are in the phase of reorganization and further development and we believe that this trend will continue “, points out Miloš Milenković, Sector for Emergency Situations.

In order to have all the necessary equipment and conditions for work in the field, they also need help, so the City of Belgrade is trying to support them in various ways.

“One way is to determine money through the Sector for Emergency Situations, and he again through the alliance, the Belgrade Fire Brigade determines that money and in that way those companies are defined and exactly the positions where they need money and in that way we help them, but also through various campaigns, through workshops “, adds Zoran Radojicic, the mayor of Belgrade.

The Voluntary Fire Brigade Voždovac was founded in 1947 and has 70 members. They are ready to help even when the problem is fire, but also water.

“We go to interventions when there are emergencies such as the floods in 2014, where we participated in pumping water for three days, and after that our members went to Krupanj for two days where they eliminated the consequences of those floods that were,” explains Radiša. M. Trnavac, Voluntary Fire Brigade Voždovac.

Belgrade has ten active voluntary fire brigades. Volunteers from “Matica” Zemun invite everyone who has the time and will to help them. Because, as they say, there is nothing better than helping others in need.