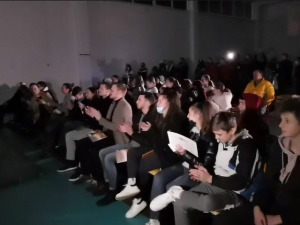 The inhabitants of Jezera applauded the rover’s touchdown on Mars

On the eve of the start of the transmission of the landing of the rover “Perseverance” on Mars at the Elementary School “Vuk Karadzic” in Jezera, a volleyball match between the teams of Earth and Mars began, and at 20:15 all eyes were on watching the live broadcast, reports the Kliks portal.

The residents of Jezera near Jajce do not expect their municipality to directly benefit from that, but they believe that thanks to the media, but also to NASA’s mission, the whole world had the opportunity to hear about a small municipality with just over a thousand inhabitants.

“All this means a lot to humanity because this is the first opportunity for some great research. For the municipality of Jezero, it is certain that this will mean a lot because in the future there will be an opportunity for additional promotion of tourism “, says Dalibor Subić from Prnjavor who came to Jezero to follow the live broadcast of the landing on Mars.

At the moment when the rover “Perseverance” touched the surface of Mars, the applause in the school hall started, followed by applause and shouts of enthusiasm.

Locals and children have repeatedly welcomed the successful phases on the rover’s journey from entering the atmosphere of Mars, opening the parachute to the final landing, and all hope that their municipality will grow and be more significant in the coming period together with Mars exploration.