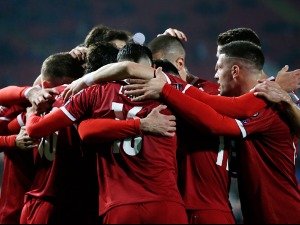 Serbia is not just playing the game of the year, but it is playing a game that can correct the past and give some new direction for the future.

Although it sounds like an exaggeration, in the words of Miloš Obilić: Tomorrow everyone’s trace will be recognized in Lisbon. Who is who, will be seen on Sunday, November 14, at the crowded “Luz” stadium.

The impression is that what we will be like tomorrow, at least as far as football is concerned, we can be forever.

Huge pressure, but also honor and opportunity are in front of the Serbian national football team.

That someone told them at the beginning of the qualifying cycle, that the first place in the group will be decided in the last match, against Portugal, at their stadium, just a few days after they showed vulnerability, or just a couple of matches after we showed that with we can play with them, so that everyone, from the professional staff, through the playing staff, fan lunatics, to those occasional sympathizers, or ordinary people, is believed to be accepted with open arms.

Serbia, a well-known and long-time football tragedian, has the opportunity in Lisbon to change its image, acquired reputation and pave the way for what selector Pixie was talking about, “with some greater successes and things”.

With the arrival of Dragan Stojković as the selector of the Serbian national team, huge changes were noticed, maybe not so much on the field, but off it.

Pixie, as someone who is one of the best football players and characters that our country had to offer to the world of football, definitely has a name, reputation, authority and respect among his chosen ones, and he managed to do to them what many before him did not.

Namely, Serbia today certainly does not have the strongest team and members of the national team in its history, but unlike previous generations, the impression is that they “feel” playing in the national team jersey much more.

There is a sense of togetherness, that they have not gathered for some punishment or obligation, that they are ready to win, lose, fight, live and die as a team.

“Let every Serb be proud of his national team,” is the sentence uttered by the Serbian coach, and it is something that still resonates in the ears of many for a reason.

Formation, play and result are something that depends on many factors, which is unpredictable and which is not always in our hands / feet.

What must not be changeable and questionable, is for Serbia to fight, to be on the level, to provide every atom of strength on the field, to play modern and brave football. Pixie promised it and so it was.

From the moment he sat on her bench, Serbia went step by step, made a mosaic and grew.

Yet, as long as she lived in the moment, she knew that Lisbon and the game of decision awaited her.

On those steps to Lisbon itself, people slipped and fell, but also got up and up, all within the collective, more precisely the team.

Far from a defeat by Portugal being a failure, because we are still talking about one of the best national teams in the world, but what would be a failure and what would most disappoint the coach, fans and the Serbian people, is that Serbia in Lisbon is not Serbia, that Serbia shoots itself in the legs and gives up everything that it was and what it went through until that moment.

This is something that, in addition to I’m sure of a billion tactical things, Pixie would also have to focus on, because it is known how much the psyche can negatively affect the team, so at least Serbia knows that by its example.

As for Portugal itself, we shouldn’t waste too many words on them – Home, hot field, football nation, the best players in the world, a space where a draw is enough for them to succeed, almost all factors are on the side of our opponent.

It is known, however, that Serbia, not only in football, is used to such a distribution of forces and such situations. That almost everything is against her, that she is cornered and that a bad result is expected in advance.

However, history is written by winners, and in sports, the biggest court is the result. It would be a huge pity, but it is possible that this team will be judged too soon and that it will be forgotten due to a bad result.

In addition to qualifying for the World Cup, that is also what Serbia is fighting for in Lisbon.

Names, promises, face, reputation and honor are on the line. “Eagles,” defend them!