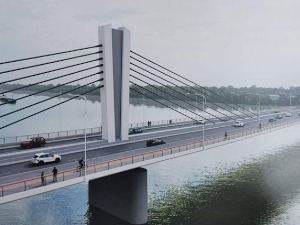 The meeting was attended by representatives of the Chinese company CRBC, led by director Zhang Xiaoyuan, Milos Vucevic announced on Instagram with photos and pictures of the future bridge and loop.

He pointed out that CRBC’s offer was the most favorable of all those who arrived, for the currently most important infrastructure project in Novi Sad.

“We talked about the conceptual design of the bridge and its future appearance, and I remind you that the beginning of works on the construction of this new bridge is planned for the end of this year, that it will be located in the extension of the Boulevard of Europe in Novi Sad.” corridor, the construction of which will begin in May, “Vučević wrote.

He adds that he used the opportunity to talk about the Frushkogorski corridor.

“I used the opportunity to talk about the Frushkogorski corridor, because it connects the Srem municipalities, and it continues on the Ruma-Sabac highway,” the mayor of Novi Sad wrote on Instagram.

He emphasized that this is a large project, of national importance.

“Also, they talked with Chinese friends about the construction of the central plant of the city wastewater treatment plant, the left bank on the location between the old Kacko road and the road E-75 Belgrade – Subotica, on the site North IV,” Vucevic wrote.

The mayor adds that the city of Novi Sad is moving forward with the help of Chinese friends and the selfless support of the state.

“We will not stop, the development of Novi Sad is our mission!”, Said Vučević.

Erdogan “selected a aspect” within the Putin-Biden duel