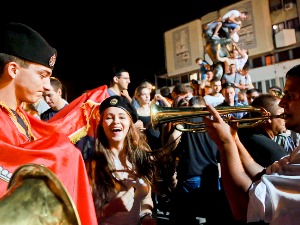 Founded in 1961, when four bands competed for the Golden Trumpet and there were only 2,500 visitors, the festival is now the liveliest event of traditional music in Serbia. Like many other ceremonies, it was canceled in 2020.

This year, visitors must show vaccination certificates or negative tests for kovid-19 if they want to enter Guca, a small town in southwestern Serbia.

“The situation is like everywhere in the world. We have to learn to live with it. “We can’t stop music and life,” one Cuban visitor told Reuters.

Trumpet bands have a long tradition in Serbia, dating back to the decree of 1831, which established a military ensemble.

More than 15 million guests have visited Guca so far during the festival’s history, and organizers and authorities hope that despite health restrictions, ticket sales, souvenirs and restaurant earnings will help the local economy.

“Many people cannot come because they did not fulfill the prescribed measures for protection against kovida-19,” Jovan Kovacevic, director of the Cultural Center in Guca, told the British agency.

Serbia has seen a sharp increase in the number of cases of covid infection in recent weeks, mostly among the unvaccinated, for which the new highly contagious delta strain is most responsible.

The country has about 7 million people and has recorded 730,222 cases of infection since the beginning of the pandemic, of which 7,158 ended in death. About 50 percent of the population has been fully vaccinated, according to Reuters.