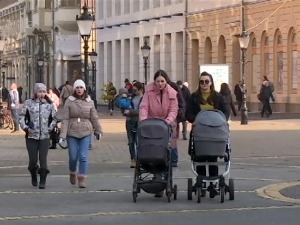 In the initiative sent to the ministry, among other things, the associations demand a fairer calculation of salaries for mothers in accordance with the number of months in which they worked, so that no mother has a lower compensation than the minimum.

Every employed woman has the right to special protection during pregnancy and after childbirth – this is prescribed by the Labor Law. However, what kind of protection it will be is determined by the Law on Financial Support to Families with Children.

In two and a half years of application, it has been shown that mothers who are not hired under an employment contract and entrepreneurs have a different treatment compared to women in employment. Thirty-three-year-old Ana Marija, who has been running the Center for Studies Abroad for six years, and how she became a mother nine months ago, felt what it looks like in practice.

“I never took maternity or maternity leave or childcare leave because it was too complicated for me and it didn’t pay off for me. The state prescribed that whoever has their own business, which is taxed at a flat rate, must get 200 euros from the state, to hire a manager, means to pay someone to run his shop or to decide to put that shop on hold and not do their job. stop because you have a child and the state really discriminates against the mothers of entrepreneurs “, explains Anna Maria Copert.

According to the extensions, mothers who have high incomes are also discriminated against – for them, the state estimated that three average salaries are enough for them during the maternity leave. All mothers who worked for less than 18 months have a lower salary than the one they had before leaving.

“We are asking for changes that include all mothers being treated equally and that their salary compensation be calculated in 12 months, as much as they will receive that compensation. At the moment it is 18 months, many mothers are damaged because they may not have worked at some point or they had a lower salary. We are asking the state to take this law seriously now and to really solve the problems, “said Ana Babovic of the” Serbia on the Move “association.

The concrete proposals for solving the problem of the four associations were sent to the address of the relevant ministry, where they say that they will be considered.

They remind that the changes made by the ministry envisage that, among other things, mothers of children with disabilities can use special child care and allowance for help and care of another person, which was not the case before.

The changes will also apply to women agricultural insured persons, so the accounting period for exercising the right to other benefits will be reduced from 24 to 18 months.

“The Law on Financial Support to Families with Children has contributed to further improving support to families through the introduction of new rights and increasing the amount of parental allowance. The law can be further improved as proposed through the Draft currently in procedure, but all further improvements are limited by available budget funds, “the Ministry of Demography and Family said in a statement.

The Law on Financial Support to Families with Children was adopted in December 2017 by urgent procedure with another 36 laws. Implementation began in the middle of next year.

There isn’t any one to select the fruit