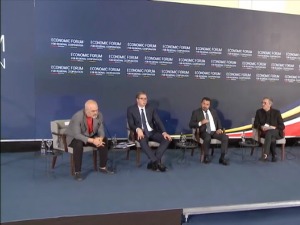 “Open Balkans” new identify for mini-Schengen, objective – with out borders for residents from 2023

The President of Serbia, Aleksandar Vučić, and the Prime Ministers of Northern Macedonia and Albania, Zoran Zaev and Edi Rama, they signed three documents in Skopje which will facilitate trade in the region and enable a single labor market, but also mutual assistance in emergency situations.

In his address at the beginning of the Forum in Skopje, Vučić said that one condition is the trust we have, and the other is that three countries, ie governments, be able to deliver results quickly.

“If we are able to do that, from January 1, 2023 – we have no borders between our countries. There are borders, but there are no borders for citizens. You go from Belgrade to Tirana, and no one stops you anywhere,” Vucic said, adding that it also increases the security of all citizens.

Vučić stated that, when moving with this initiative, both he and the Prime Ministers of Northern Macedonia and Albania, Zoran Zaev and Edi Rama, did it as something good, as a look into the future, which changes things in the Balkans, where , he noted, it was always easier to find the shortcomings of others and the reasons for quarrels.

“When we talked, we thought about how good it would be if those who were not the closest, and Serbia and Albania were never particularly close in history, we decided to turn our heads from the past to the future and think about what we should leave. to his children, “Vucic said.

He pointed out that sincere mutual trust has developed in the last two years.

“And in terms of relations with the region, Europe and the world, but we are neither stupid nor naive to believe that someone else will work for the benefit of our countries if we do not do that,” Vucic said.

That is why, he says, it is important to show the citizens of the three countries that we are able to make decisions on our own, to take care of ourselves, to improve the lives of citizens, to be on the road to the EU, but to work with everyone and not wait for someone somewhere. introduces, but to change our destiny and work in the interest of the citizens.

“Trust is a key thing that has happened in the meantime. And when you have that, you don’t think about what others thought with the other proposal. There is nothing behind our proposals, only the interests of our citizens,” Vucic said.

“How can the citizens of Albania or Northern Macedonia not win, if we can go to Skopje and Ohrid, Tirana, Durres, Shkodra without delay. If we succeed in a year and a half, that is history,” said Vucic.

He said that countless possibilities open up for everyone, and none of them is bad for anyone, just the opposite.

He also pointed out that Serbia, Northern Macedonia and Albania will end the year with a total of 76 billion euros of GDP, which is less than Slovakia, and we can, he points out, reach them, and even surpass them in five or six years.

“We can be the growth machinery of this part of Europe, but we have to help businessmen. We work so that we can leave the past behind, to look to the future, to lives, to the progress of living standards. People can only benefit from this, no harm “, said Vucic.

The initiative, he repeats, is not directed against anyone, but only with the “sacred” goal – for the citizens to live better, from which, he says, there is nothing more important.

“There will always be opponents who will look for conspiracy theories, who do not think about economics, who will find flaws in everything. I know that not everyone in the world is thrilled because the steering wheel is not in their hands, but in the hands of our three sovereign countries. which make their own decisions. We are wondering, our citizens are wondering, “Vucic said.

He added that he will embark on concrete initiatives to provide benefits to citizens, such as discounts on train tickets, toll collection, so that people can feel why it is good.

“It is our job, and I am asking you businessmen to help us, to put pressure on the chambers, but also on us to work faster. To try to open the borders completely. It is a historical task, we will see if we are up to it, and I believe that we are “, said the President of Serbia.

He added that the time has long come for us to escape from the “colony-sizeren” relationship, in which we should ask others, but take our destiny into our own hands and decide on ourselves.

Zaev: A new era of cooperation in the region is beginning – political relaxation

The Prime Minister of Northern Macedonia, Zoran Zaev, said at the opening that a new era of cooperation in the region begins today, that the Mini Schengen initiative will be given a new name, which will be an additional impetus to economic cooperation and relaxation of political relations in the region.

“This will be a recognized initiative that will be widely accepted in both Brussels and Washington. It can make a serious contribution to political relaxation in the region,” Zaev said at the forum.

He said that the initiative is open to all Western Balkan countries.

I encourage everyone to join us for the benefit of all peoples at WB, so that this would be a common space, Zaev said.

“This is a great response to the call for the Balkans to start creating an economically connected space,” Zaev stated.

He pointed out that the common political will of both him and Vučić and Rama is to give maximum support and provide conditions for greater cooperation in the region, for the benefit of all our citizens and a higher standard of living due to the facilities that will be introduced.

“It is clear that only with an integrated and connected region can we move faster towards EU membership. All we are doing is the result of European values, because we strive to improve four freedoms – movement of people, goods, capital and services,” Zaev said.

He adds that it is important to slow down the 24-hour work of border services, expand the green corridors from the WB to the EU.

Our goal is to have a continuous movement between the border crossings of the three countries, and we hope even wider, Zaev emphasized.

The Prime Minister of Albania, Edi Rama, also addressed the Forum, saying that Mini Schengen is an initiative of strategic importance for Albania, but also that the region needs it if it wants to develop economically and move forward, and not remain a “prisoner of the past”. ‘.

Rama said that there is no progress in the region if the countries do not jointly develop the economy and create prospects for more jobs, especially for young people.

“Some people are punished for living in the past, we want to turn to the future through this joint initiative that aims to” live “in the region, such as the EU, four freedoms – freedom of movement of people, capital, goods and services ” ”, said Rama.

He said that we should not turn our backs on each other, as he says, we did 500 years ago, while, on the other hand, EU countries have their own rhythm of movement and conditioning.

“And when the region integrates into the EU, we will do the same as now. “Now we are establishing it without the EU, and when we become part of the European family, there will be no discussion about whether these four freedoms are enabled in our region or not,” Rama said.

He emphasized that Mini Schengen is not an “exclusive” initiative of Albania, Serbia and Northern Macedonia, but that it is for the benefit of everyone in the region and that everyone who wants to join that initiative should do so.

Covid Renews Curiosity in Radiation, however Docs Warning In opposition to Pilgrimages to Radon-Stuffed Mines