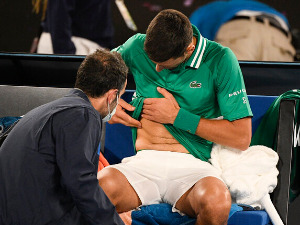 The world “number 1” outclassed Medvedev with 7: 5, 6: 2, 6: 2 in one of their best finals in “Rod Laver Arena” and, if someone had not watched the tournament from the beginning, he would have thought that everything was fine with a Serbian ace.

However, it is known that against Taylor Fritz, during one slip, he felt pain in the lateral abdominal muscle and was close to surrendering the tournament, but after winning the trophy, he confirmed that it was a rupture.

“I know that many doubt, but I really tore a muscle. I never felt it, but the magnetic resonance showed a tear,” he said at the press conference after the final, and at the official photo a day later, he revealed the severity of the injury.

“I came back from a new MRI I did this morning and the damage is greater than when the injury happened.”

After Fritz, Novak played with Miloš Raonić, and many then commented that he may have injured his abdominal muscle, but that he did not break it, judging by his movements and blows. By the end of the competition, with the help of his physiotherapist Ulysses Badio and tournament doctors, he managed to recover enough to be able to play.

However, great efforts at the first Grand Slam led to a worsening of the injury, and Djokovic also revealed his current condition.

“The rupture is currently 2.5 centimeters – 25 millimeters. When the injury happened, it was 1.7 millimeters,” the Serbian tennis player revealed.

“If you believe the doctors, it’s not that bad, but I will have to take a break to recover,” Djokovic concluded.

It is already known that a documentary will be released about the way he recovered during the tournament.