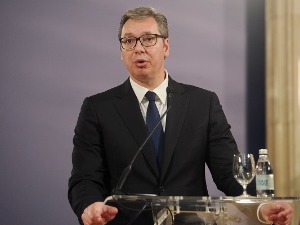 Aleksandar Vučić said for Prva TV that it was logical to expect everything that happened in Cetinje the day before enthronement of Metropolitan Ioaniki of Montenegro and the Littoral.

“Tensions and protests against enthronement have been announced. Party-organized rallies. Cetinje is a place where over 90 percent of the population is oriented against the Serbian Orthodox Church of the Serbian Orthodox Church, where there is pronounced hatred towards everyone who belongs to other nations. But I would not even say that it is real hatred, already induced by the actions of politicians in Montenegro. It was logical to expect everything that happened, “Vucic stressed.

He emphasizes that it is good that the Montenegrin government changed its decision during the night.

“The media in Serbia did not do anything wrong. It was true that the enthronement should not have happened. The police directorates and the Montenegrin government recommended it. Then during the night the decision was changed because the patriarch and the metropolitan insisted on enthronement,” Vucic explained.

He says that the Security Information Agency (BIA) informed the leadership in Serbia all night about what was happening in Montenegro.

“Montenegrin government has done its job”

Vučić says that the Government of Montenegro took care of the security situation and succeeded in that, even though everything was difficult for them.

“They have a dichotomous power because part of the executive power is in the hands of the previous regime. One part of the power was present in Cetinje, which is not easy. However, the government did its job and the enthronement could be carried out in the Cetinje monastery,” Vucic said.

He believes that the Prime Minister of Montenegro, Zdravko Krivokapić, also had problems because he is part of the police along with the DPS, Milo Đukanović’s party.

Speaking about the actions of the police, Vučić said that they always let people go until they see how the situation will unfold, and only when they have to react.

“You remember, we were surprised by that alleged force regarding the covid measures. Only when they entered the Assembly did we bring them in and show that the state can finish everything within five minutes. It’s just a matter of will and democratic rights and freedoms,” he said. is Vucic.

“No one in the West will react, it is allowed to do everything against Serbs”

Vučić pointed out that no one in the West would react to the fact that Montenegrin President Milo Đukanović sided with those who tried to prevent the enthronement of Metropolitan Joanikij of Montenegro and the Littoral because, as he says, everything is allowed to be done against Serbs.

“You can imagine what it would be like if I did like him, I would be hanged in Brussels and Washington that second. This way everyone will be silent, they will call for peace, which is good and beautiful, but no one will say a single word. That’s because it’s it is allowed to do everything against Serbs “, Vučić emphasized.

Serbs, he said, are a disruptive factor for many Western countries.

“They want Serbs not to be a strong factor in Montenegro. That is why there is a chase against Mandic, Knezevic and others. That is why all foreign factors say that they cannot enter the government. That is why there is a campaign in Bosnia and Herzegovina. It is no coincidence. “Izetbegović joined the support. I understood that he knew a little about sharia law, but I did not know that he understood the issue of the Serbian church well. I see that he is doing well,” said Vučić.

He said that the decision of the Government of Montenegro is reasonable and rational because someone tried to occupy a part of the territory.

He says that Serbs want to be on their own, on their ancestral hearths, and they are just looking for the right to life, the right to freedom of religion, language and script.

Vučić believes that behind all the events in Montenegro is an effort to weaken Serbia because, as he says, a strong Serbia does not suit anyone.

“The goal is to weaken the Serbian factor. The only essence is how to restrain the Serbs, we must disempower those who lead Serbia in a responsible way, to silence the Serbian factor because how is it possible that Serbs do not have a voice in Montenegro or Bosnia and Herzegovina. a moral and principled question, how only Serbs do not have the right to self-determination “, said Vučić.

“We want fraternal and friendly relations with Montenegro”

President Vučić told Montenegro and its president that Serbia has no aspirations towards that country, but wants the best relations with it, but also that it will not allow them to conquer Serbia as they have done for the last almost 30 years.

Commenting on Milo Đukanović’s statement about the Greater Serbia aspirations and the attempt to subdue Montenegro, Vučić said that Serbia has no aspirations, but wants the closest relations with Montenegro,

He says that Serbia will do everything to make it so, despite all the humiliations it has gone through, through various decisions of Montenegro.

“We have not and never intended to subdue anyone, but I tell him that neither he nor anyone else will be able to conquer Serbia, as they have been doing for 30 years. You have ruled this country in all possible ways, through crime, police officials, political officials, those in the intelligence structures “, said Vučić.

Vučić pointed out that attacks on Serbia always came from Montenegro and that that country was used as a training ground for an attack on Serbia.

“They are used to governing Serbia. We do not want to rule Montenegro. We want brotherly and friendly relations. And I guarantee, while I am alive I will not let you conquer Serbia, as you did for almost 30 years. While I am alive, and you all know what to do it means, “Vucic said.

“It was a political plan that they tried to push through, and then it was my fault and Serbia’s fault because we, receiving information from various sources, recognized their plan and started talking openly about it,” Vucic said.

He assessed that what is happening to the Serbian people in Montenegro today and what happened to the Serbs in Croatia during the 1990s is a continuation of similar ideologies whose goal is for the Serbian Church to be extinguished.

“They intentionally call it the Church of Serbia, even though it is a Serbian church that has never rejected people of the Orthodox faith,” Vucic said.

“Joanikije must take care of the entire faithful people in Montenegro”

Aleksandar Vučić says that it is up to the enthroned Metropolitan of Montenegro and the Littoral, Joaniki, to continue to take care of the faithful people in Montenegro, as well as to work on calming tensions.

Vučić reminded that he had already congratulated Metropolitan Ioaniki yesterday, the day before the enthronement.

“He is in a very important place and he must take care of the entire faithful people in Montenegro, additionally work on reconciliation, on reducing tensions, passions, and I believe that he will continue to do that with Patriarch Porfirio,” Vucic said.

When asked whether the security of the patriarch and the metropolitan was endangered, Vučić said that, since they came to Cetinje by helicopter, it is clear that things are not simple.

“They landed on the land behind the monastery, managed to come by helicopter. They were met by members of the special police and taken to the monastery,” said Vucic.

He says that he knows who kept them, that they are different people, in different places, but he did not want to talk about it in more detail.

“The story of election conditions is empty and fictional”

The President of Serbia and the leader of the ruling Serbian Progressive Party says that the story of the opposition about the election conditions is an empty and imaginary story – a justification for a bad election result.

He told the opposition that there was nothing wrong with coming to power across the street and by force.

“The government will change in the elections and the people will always decide. It is good that they confirmed it themselves. When you talk about the election conditions, you have to compare it with something. When in 2012 there was no media on the opposition side, then we did not cry.” We have already dealt with the program and plans, and we have won, “says Vucic.

The problem of the opposition, he says, is that they have neither a plan nor a program, except how to destroy Vučić’s life and work against him.

He also says that he did not make any decision regarding the candidacy for the presidential elections next year, but that the position of the party he leads is for people who are able to win to run.

“We are looking at everything with coalition partners. Our presentation at the meeting with the SPS the other day was short, theirs was much longer. Our views are quite clear, but I will not speak about it publicly now,” Vucic said.

Regarding the date of the elections, the President of Serbia said that they must be in accordance with the law, between April 3 and 17 next year.

He pointed out, however, that April 10 is the day when the Independent State of Croatia was created, so holding elections on that day would not make sense, because of the sacrifice of the Serbian people, so the elections will be on April 3 or 17.

“Citizens can expect further growth in salaries and pensions”

The President of Serbia, Aleksandar Vučić, announced that the citizens of Serbia can expect further growth of salaries and pensions, as well as that the state will continue with large public investments.

He reminded that the minimum wage was increased from 15,000 dinars, as it was in 2012, to 35,000 dinars, which, he says, is an increase in the nominal amount of 120 percent and speaks of how much Serbia has progressed, especially the poorest.

Serbia cultivates each US and China in Balkans tug of battle