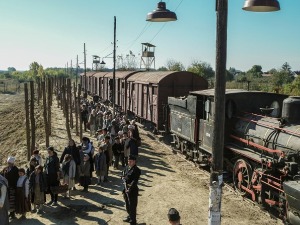 I swore I would not cry “Daru”

Tears must not cloud any part of you. And I succeeded! Barely, but I held back a tear while listening to the song of Dara’s mother, all Serbian mothers who cried with the song, anticipating evil!

And those were the hardest moments for me. Those in whom you still see hope, naivety, faith that it will be good in human eyes. In the column that is going to die, children are still arguing, laughing, teasing, and adults, although in fear, hope that everything is just a mistake because … they did nothing wrong!

Somehow, it seems to me that the hardest thing is to watch the trouble from afar, while it is creeping up on you, cruel and inevitable. When you find yourself in it, reconcile or fight, but there is no more expectation and deception.

That is how I became hardened, like Dara who is dealing with inconceivable evil, the murder of her brother and mother in front of her eyes and the heavy burden of caring for her two-year-old brother.

That little boy becomes her shore, a life force that does not allow her to give up, to surrender and admit victory to nothing.

If Dara can take a bowl of food from a woman who was killed in front of her eyes because she knows she won’t eat otherwise, I too can not cry watching that cruel scene!

And I endured everything, even the terrified eyes of the children over whom, in the smoke of the gas bomb, the basement door closes.

I grew up without tears and the despair of Dara’s father when he recognizes his son and wife among the corpses, which he throws into the mass grave by order.

My heart trembled so instinctively when I heard Dara’s words addressed to her brother: “No one will separate us! You swear!”.

I recognized in them my genetic code, the language of my family, the sadness of my family. But I didn’t give up!

I survived, as did Dara, the burst fired at her as she ran after the bus in which her brother was being taken. Dara, her little brother and father, who miraculously managed to escape from the camp, did not enter the death car.

The end of the film left hope that they survived, that life was overcome by the darkness of carnage and hatred. He also left a message that someone should always survive in order to testify about evil.

Survivors rose from almost all execution sites, incinerators, from karst pits on Velebit. They carried their cross, remembered death, but, in their martyr’s way, celebrated life.

And as weird as it sounded, I celebrated it too. In a torrent of tears that I no longer wanted to stop.

I cried, penitently, sincerely, without hesitation or question.

I begged Daru and her brother to forgive us for not knowing about their love and struggle. I begged the souls of innocent victims to forgive our oblivion.

And I felt them there, next to me, smiling and rejoicing! Their and my pain disappeared in tears.

Two hours of Jasenovac’s pain and pain, as the screenwriter of this film said well, brought us together alive, descendants who carry that suffering in their genetic code. It was as if we could touch each other, join hands and pray together.

And let at least a few critics, analysts, experts in directing, acting, scenography, camera be silent. This movie is above that!

His Oscar is us who watched him, cried, kept silent and in the end still celebrated life.

Life, beautiful and innocent like Dara’s eyes, like a sunny morning after a dark night in Jasenovac! A morning that will never dawn for the executioners. Thank you, Daro!

Ballot: Which of the 24 songs competing in Serbia’s Beovizija 2020 is your favorite?