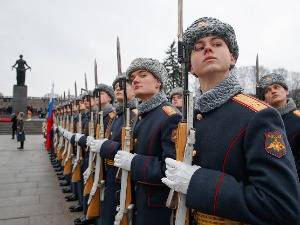 Russia has both recruits and professional soldiers

The largest and militarily strongest European country, Russia, has a compulsory military service. Although the abolition of military service and professionalization have been announced for several years, due to the bad economic situation, the recruits are still guarding the Russian Federation.

Military service lasts 12 months and is served by men aged 18 to 27, who do not file or their conscientious objection is not respected. That is, the vast majority of young people. Twice a year in April and October, 130,000 people wear uniforms and serve their military service not only in the army, but also in the Ministry of the Interior and the Border Guard.

In addition to training, recruits also participate in large military maneuvers and are therefore equal to professional soldiers. Only they don’t go to war. Russian recruits have detailed information about their rights and obligations, addresses of recruitment centers on the website of the Ministry of Defense.

Although information about the structure of the army is kept secret, the fact that about 260,000 a year serve military service, and about 680,000 turn 18, shows that most young Russians still do not serve in the army. The law allows the military not to serve for health reasons, graduate studies, family, or criminal record.

The Russian army, however, has no problems with human potential because it assesses the mood of young people and the number of recruits well, and the Armed Forces are a desirable employer because of their good salary and numerous privileges for professional soldiers. Russia formally recognizes the right to conscientious objection for religious or religious reasons, but the fact that it lasts 18 to 21 months is rare for any Russian to opt for this option.

Belarus, a small number of recruits, but the army is doing well

Belarus has one of the most rigid recruitment systems, but only on paper. The army is served by men aged 18 to 27, for 18 months if they have completed high school or 12 with a university degree. The armed forces of Belarus are counting on the bad demographic situation, but also on the unpopularity of the army among young people.

About 53,000 young people turn 18 every year, but according to official data that no one hides, 80 percent of people avoid military service in various legal ways. Mostly due to health reasons, and until recently also due to studies. So, a law was introduced that able-bodied men cannot enroll in postgraduate studies without having served their military service.

However, the Armed Forces of Belarus have no problems with the influx of young people. Those who do not escape military service, or 11,000 people, serve in all units, even in the airborne and special forces, and participate in large military maneuvers. Replenishment of the reserve force is also not a problem because more than 300,000 people have served in the army in the last 20 years. The civil service for conscientious objectors lasts for 27 months, the criteria are very strict and rarely anyone decides on this option.

Ukraine, military service returned due to the state of war

The rigidity of the recruitment system in Ukraine is a consequence of the need to defend the integrity of the country and the small number of professional soldiers. Although there are numerous articles in the media about thousands of arrests of deserters and the military system is quite secretive, several data show that most Ukrainians still serve their military service.

In the last five years, about 900,000 Ukrainians have served in the army regularly, voluntarily or have undergone reserve training. Rarely does anyone manage to escape the army. In 2019 alone, the military filed 35,000 criminal charges against young men who did not report to their unit. It is not uncommon for ethnic Russians to flee to Russia to avoid the army, and those from the west to Poland, Slovakia or Hungary.

However, at the end of 2020, the Chief of the General Staff of the Ukrainian Army announced that he was considering the abolition of military service, considering that the staffing of the armed forces with professional soldiers is very good. Work will be done on creating a strong reserve force, and all Ukrainians will be obliged to undergo training for reacting in emergency situations and providing first aid.

In the southern part of Europe, ie NATO, ie the European Union, there are the most rigid systems of military service – the armies of Greece, Turkey and Cyprus in terms of human resources function similarly to the time of the Cold War.

Young Greeks serve nine months of military service, and the Greek Armed Forces base their combat readiness on a large number of recruits. It is interesting that at the beginning of the 21st century, the Greeks shortened their military service from 12 to nine months, due to the mass avoidance of service in the armed forces.

More than 90 percent of young people are capable of military service. According to data from 2019, the army was served by 51,000 young Greeks, nine months in the Army and 12 in the aviation and navy. At most, 45,000 serve in the Army, which has a huge amount of equipment, tanks, armored vehicles, and artillery.

Reservists are occasionally called upon for training lasting up to ten days, in order to renew their military knowledge. Greece plans to extend the duration of regular military service from nine to 12 months in 2021, due to the tightening of relations with Turkey.

Conscientious objection is recognized in Greece, but the criteria are very strict, which is why the government in Athens is the target of criticism from human rights activists. Civil service lasts 13.5 months.

Turkey is the only European and NATO member country that does not recognize the right to conscientious objection and all able-bodied men are subject to military service. The system is very strict in the sense that the rules are strictly followed, the principle of voluntariness is not important, but Turkey has adjusted its rigidity to the mood of the public.

Compulsory military service lasts 12 months for young men with secondary or primary school or six months for those with a university degree. The army is not only served by citizens with serious health problems. In order to preserve morale and order in military units, but also so that the Kurds would not serve in the army, the Turks created a system to train uniforms only by those who are motivated. The others have to pay 4,400 euros and undergo a one-month military training.

Of the 680,000 able-bodied men, 460,000 were paid and served one month in training or a theoretical course, and about 220,000 spent six to 12 months in the military. After the training, the recruits go to military units across the country, and even to Kurdistan for combat missions.

Turkey bases its military power, in addition to a large amount of combat equipment, on mass military training. The active army has 355,000 soldiers, and the organized reserve consists of 380,000 soldiers. However, in the last 20 years, more than 4 million people have undergone military training, who are ready for combat tasks in the event of war after a short training.

Cyprus, everyone is defending the homeland

The Army, ie the National Guard of Cyprus, bases its strength on mass military training and conscripts on military service.

More than 90 percent of Cypriots are capable of the army, about 9,000 wear uniforms a year, and as the army lasts for 14 months, the number of recruits ranges from 10,000 to 11,000. After military service, the obligation of occasional military training exists until the age of 50. The organized reserve of the National Guard numbers about 75,000 people.

This is what military service looks like in countries where systems are more rigid, but you have seen that at a time when we have stepped deep into the 21st century, strict rigidity cannot go well. Young people love their countries, many are ready to serve in the army voluntarily, but countries still adapt their system to the country’s defense, but also to the mood of the citizens, especially young people.