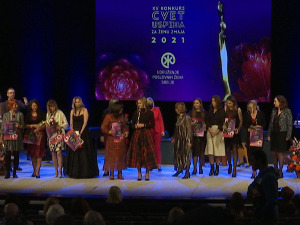 They prove that women are the driving force in the realization of sustainable development goals, virtuosos in turning challenges into opportunities, and they are rewarded for that. This year’s winner of the “Dragon Woman” award proved herself in the men’s business.

Most of them overcame crisis situations in a difficult, pandemic year. They remained on a good path to return to the path of success.

“As many as 20 percent plan to hire new workers, and only one company out of 117 respondents intends to close due to the negative effects of the crisis. It is not enough to say that these results require a dragon’s heart and strength, but I believe that the crisis chain of the last 30 years has contributed greater resistance to challenges of all kinds “, states Dr. Sanja Pantić, President of the Association of Business Women of Serbia.

The state sees female entrepreneurship as a benefit for the whole society and is ready to help them.

“I wish everyone a lot of success in their further work, but I also commit myself to work with other ministers in the government on behalf of the Coordination Body much more to support women who are already in business, who want to continue to expand their activities,” said Zorana. Mihajlovic, Deputy Prime Minister and President of the Coordination Body for Gender Equality.

The awards were also given to the most gender-sensitive companies, which apply gender equality and socially responsible business strategies in their business.