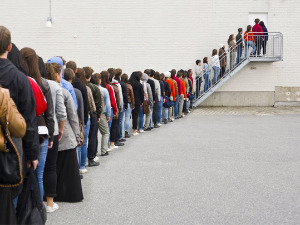 The plague called SARS-KoV-2 arrived in Europe in early 2020. A state of emergency was introduced in our country on March 15. Wearing a mask and keeping your distance from others were the first advice of all epidemiologists, virologists, immunologists, authorities, crisis staffs …..

It is calculated how many people can be in a certain closed space at the same time. We stood neatly in front of shops, banks, pharmacies and all public facilities that worked with customers. We did not use public transport for two months.

Soon, signs appeared in front of the cash registers in supermarkets, indicating exactly where we should stop while waiting in line for payment, in order to be at the proper distance from each other. Those marks still stand today, but as in March 2020, they have no purpose today.

State of emergency in full swing, I stand in a supermarket in line in front of the cash register in a place marked with a red dot and always, unmistakably, someone stands in front of me, because he sees enough empty space and thinks that I am standing where I stand for some unknown reason.

And now that unpleasant feeling appears. You don’t know how to react, to be polite, and still protect your right. Should you warn the person in question who will roll his eyes and look at you with that look in the style of “What are you acting?”

In situations like this, I always remember one of the strongest impressions that I remember as a twelve-year-old from my first trip abroad. We landed at the destination, got off the plane and on the runway I saw a column of people standing neatly one by one in line and boarding the plane. I was so stunned that I asked Dad what was going on. “Nothing, that’s how the English stand,” was his father’s answer.

When we returned, I was already uncomfortable at the airport and I was ashamed. Passengers boarded two planes at the same time. One was flying to Belgrade and, of course, in front of him, without any order or principle, there were about fifty people trying to reach the steps from all sides, and the other, in front of whom was a column of people patiently standing in line one by one.

I don’t remember, but I believe they must have boarded the plane before us. To this day, I have not seen such an order in our country, although we have been taught since kindergarten to go two by two, one after the other, but obviously we have a stronger feeling that we will get to the queue if we “thicken” as much as possible and eventually succeed. maybe to “push” across the line or just prevent someone else from doing it. Mental characteristic – distrust and impatience? Maybe?

Although I am confused by the fact that many say that when we are not in our homeland, we know all the rules of behavior very well.

In my neighborhood, in one building, there are two banks across from each other. The pandemic is in full swing, pensions have been paid, there is at least 30 people in the area of ​​no more than ten square meters, not to exaggerate. Yes, they have masks, some on their noses, some on their chins, but they breathe neatly around each other’s necks. It is impossible to approach the ATM, just as it is impossible for those who managed to finish the job in the bank to get out and break through this human shield.

I remain confused, angry, furious. I wonder why so? Both banks have security guards standing there and “trying” to bring some order. Who should take care that these people do not stand like this? Why don’t they share numbers? Why not set up barriers so that people are forced to stand behind each other? Why do we think the queue will move faster if we stand densely packed?

I will not mention now those who try to enter by wanting: “Just ask something?”. This is another type of mental characteristic of our space.

And now I go back to the story from the beginning. How is it possible that in the Kovid ambulance, people are trying to get their turn to have an examination? I wonder how many people returned home when they saw this chaos and were not examined, and they had a covid infection, as well as how many of those who came with a common cold went home infected with the coronavirus.

The mentality? Not the existence of consistent rules? Historical heritage? The culprits on duty – the Turks? Lack of urban culture? Socialism? Transition? Liberal capitalism? Or all together?

Of course, for almost two years now, I have not been able to keep the prescribed distance in any supermarket. I had already given up on that plan, because I was tired of being warned to move, because three people had already put the goods in front of the cash register in front of me. What are you waiting for ?! Push yourself! Pack up like a sardine and again that look in the style of “What are you acting?”. I’m trying to somehow create a barrier with a wheelchair, so I stand in front for an hour and behind them for an hour, so that I don’t move at least a little.

I try to get on the front door of the bus. Sometimes I succeed, sometimes I don’t, because someone is standing at the same door or coming out. I can’t get out at the middle door either because most of the passengers are trying to get in there. We can’t learn that either. I wonder how in the time of socialism, everyone knew that you should go to the back door and buy a ticket from the conductor? Today, even the majority thinks that the ticket should not be paid, so it doesn’t matter how we get on or off the bus.

I’ve also learned that for all those who overtake a column of cars while we’re all standing neatly I think they might be in a hurry because they’re in some big trouble. It’s so much easier for me. Although I can’t always refrain from spontaneously firing a few swear words at their expense.

However, that trait is also valued in our society. These are the “capable” who in every situation manage to cope, not to wait, not to pay, to finish the job across the line and the like ….

PROUD! The Prime Minister congratulated Novi Unhappy on the European award in tradition

‘We aren’t ecstatic. There was no music within the dressingroom’