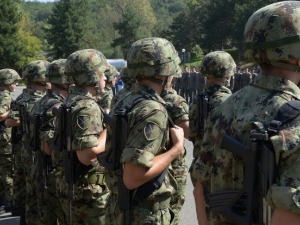 Defense Minister Nebojsa Stefanovic told RTS that the defense strategy between 2004 and 2012 was towards the integration of the army into NATO and that it was reduced to a fifth of its previous size.

Pointing out that, although they are militarily neutral, both Switzerland and Austria accept recruits for regular military service.

“Serbia is on the path of military neutrality, which requires a strong army that must deal with the protection of the civilian population and other operations that do not necessarily require weapons,” Stefanovic emphasizes.

According to him, when we did not have a strong army in history, civilians suffered much more.

Retired Lieutenant General Milomir Miladinovic emphasizes that in order for the war component to be fulfilled, a regular military service is needed, in which it would be built in the next five to ten years. He believes that Serbia’s security challenges are significantly greater than, for example. have Denmark and Finland who have regular military service.

He emphasizes that a very small number of formation positions are being filled now, because, according to him, 500,000 reservists have been lost in ten years, which must be filled by some people.

As he pointed out, every second, 50 billion dollars are spent on defense in the world.

Ignjatijevic: Mass recruitment will not solve the mass outflow of personnel

On the other hand, the researcher of the Belgrade Center for Security Policy, Marija Ignjatijevic, believes that the return of regular military service is not necessary, since, as she says, Serbia does not face security challenges that require mass recruitment.

As another reason, he states that the regular deadline does not solve the problem of outflow of staff. The recruits would not be able to replace the professionals who left because they had been specializing and training within the army for years (computer scientists, tankers, doctors), according to Ignjatijevic.

On the remarks made, Stefanović returns to the example of Switzerland, which, as he notes, is certainly not in any immediate danger, and whoever does not want to serve, pays a tax of three percent of the total personal income. “If the country is in immediate danger, it can only rely on its own people,” Stefanovic said.

Stefanović adds that professionals from the army should say what the needs of the army are, how they see it in the future, what role the recruiting army should play, how many new ones we need and what the modernization of the existing barracks should be like.

“We are considering whether we will have enough money for that, and the recruits would have a salary that would not be symbolic. Those who go through the service of the term feel that they have given something to their country and would acquire skills that will be useful in civilian life, such as driving a truck.
Those who are medical professions can serve at the Military Medical Academy and that can be counted in my internship “, states Stefanović.

Instead of the regular deadline, Ignjatijevic proposes the concept of an active reserve that goes hand in hand with the professional composition of the army. As she explained, those who would decide for that possibility, would sign a contract with the obligation of 45 days of annual service in the army.

Minister: There are no obstacles for the citizens of Kosovo and Metohija to serve in the army

Stefanović stated that there is no obstacle for those citizens from Kosovo and Metohija who want to serve their military service.

“They have the right to serve military service. It may not be realistic to discuss training today that would take place in our province, but there is no obstacle for them to be called up for military service in central Serbia. We are considering what would be the most efficient model.” “The fact that Kosovo and Metohija is a part of Serbia is not undermined, but we also respect international regulations because there are things that we have to understand as a reality,” Stefanovic said.

He says that it has happened to Serbia that it has become much more economically powerful.

That is why the salaries for soldiers are being raised.

“Besides that, we want to keep people in the army,” says Stefanović.

General Miladinović states that the economic moment is important, and that is why there is no response for professional soldiers in urban areas, ie soldiers under contract.

The problem, he adds, with professional soldiers is to regulate that certain occupations of people remain until the end of military service.

HELL EDUCATOR Poisoned 25 CHILDREN in kindergarten due to an argument with a colleague, now she is ready for the DEATH PENALTY