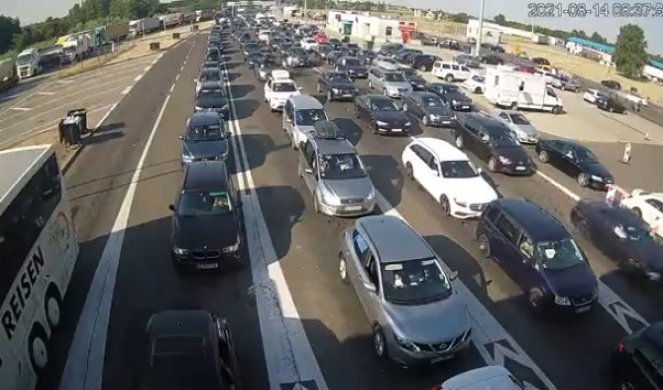 Detention of automobiles on Presevo for as much as two hours

On Horgos, trucks are waiting for an hour and a half at the exit from the country.

Roads of Serbia warn drivers that the traffic regime on the part of the highway in the zone of the Kolari loop in the direction of Nis has been changed, so that by tomorrow in the direction Belgrade-Nish it will run in the right-stop lane and overpass lane in the opposite direction and in the direction Nis-Belgrade .

On the highway Miloš Veliki, on the section Ub – Obrenovac, in the direction of Obrenovac, until August 21, works are underway on the repair of the elastic fence in the dividing zone, so the traffic is taking place in the lane.

The traffic on the road Kraljevo-Mataruška Banja was suspended until August 31 due to road rehabilitation works. Access to Mataruška Banja from the direction of Ušće-Kraljevo is not possible, (state road IB row no. 22), and the alternative road route is Kraljevo-Žiča-Mataruška Banja.

On the road Lebane (Bojnik) – Lebane, until tomorrow from 7 am to 5 pm, works will be done on changing the road with alternating passing of vehicles, regulated by traffic lights.

There are no vehicle detentions at toll stations on highways in Serbia.

If the Unvaccinated Wish to Work, They Face a Sequence of Hurdles