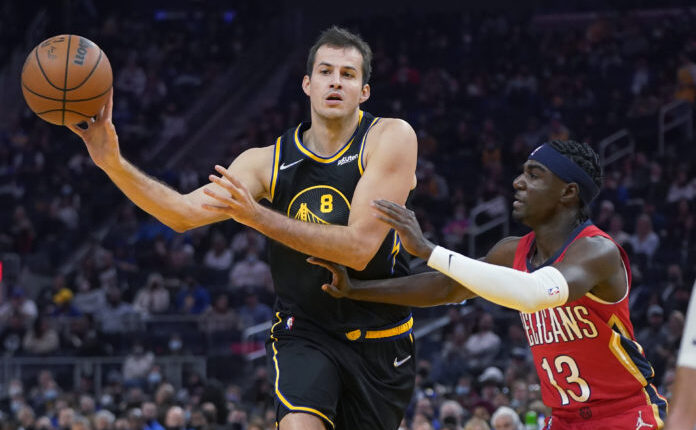 Bjelica: Anybody can play within the NBA

The Golden State Warriors beat Detroit 105: 102 away, and another good game was shown by the Serbian international Nemanja Bjelica, who scored 14 points, 8 rebounds, two assists and one stolen ball.

The Warriors played without their main players, but recorded their 14th victory.

– Great victory. Especially since it was achieved when we played without four players. I liked how we fought and competed, we showed reaction. We did not underestimate Detroit, we were aware of their results. Anyone can play in the NBA. We started the match well, but of course, there were ups and downs. We continued to fight, it was uncertain until the end, but that is part of basketball – Bjelica pointed out and added:

– Gary is a real athlete, sometimes, I open the space for him, or he sets up a block for me, it depends on who is guarding us. It always brings great energy. Our second lineup is able to play really well. It’s hard for the opponent. Sometimes the defender guards me, and the tall player Gary, but when he scores points like tonight, he is dangerous. I think that our defense is getting better, when you have someone like Stef in your team, it’s much easier.

And the Warriors’ defense is working better and better.

– The professional team deserves credit for our better defense, but we all know our role in defense. We communicate, we don’t give up, we help each other, sometimes we play in the zone, sometimes in triangles… Sometimes it is difficult to adapt, so we often change our game in defense. So far, so good. There is nothing new to learn here. When you play with players like Draymond, Steph, Andre, they have been together for years and it is much easier to play with them. Not because they are veterans. Communication and the way we change the game in defense, it is difficult for the opponents. We also have strong guys like Juan, every time he enters the game, to contribute – Bjelica thinks.

– The way we win is sometimes really crazy, especially when Stef plays. He is the one who changes the basketball game, then it is easy for us to play. Everyone is open, and the opponents pay a lot of attention to him and Draymond, as well as Igudali. That’s how we can defend ourselves. As for the attack, our coach Steve Kerr says, ‘play freely, but watch your discipline’. Sometimes we overdo it, but as a group we are great and everyone knows how to play. Everyone is ready at any moment – the Golden State basketball player concluded.

Squeeze the BRAKE, NOT THE GAS! On the event of the World Day of Visitors Accident Victims, an IMPORTANT LECTURE WAS HELD