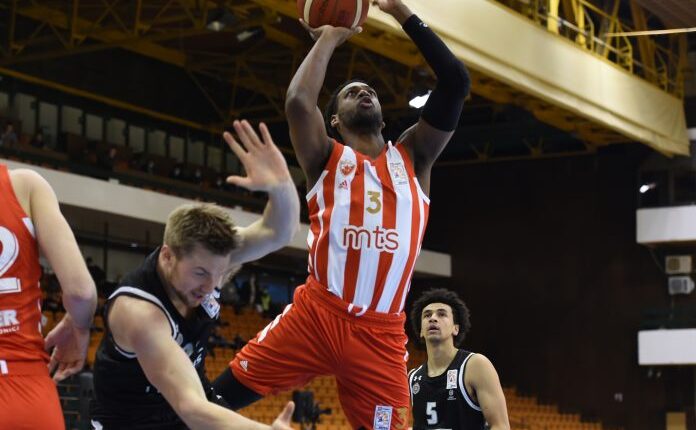 In the fight for “Žućko’s left”, the red and whites will play against Mega SoccerBet, which was better than Vojvodina in the first semifinal with 82:75.

How many changes there were in the lead of the two teams in the last three minutes, all thanks to a flawless shot from the penalty line of both.

They did not miss the throws in the dramatic finale, and there were a lot of them, so that in the end, luck stopped on the side of Zvezda.

Decisive was the fifth foul by Ognjen Jaramaz eight seconds before the end, Dejan Davidovac hit both penalties, and on the other side there was no player who would pass the ball in the right way and organize the attack.

Branko Lazić stepped in and stole the key ball, and that is how Zvezda scheduled the grand final on Sunday night.

It started with five points each from Marcus Page and Jordan Lloyd, but then a series of Partizan 6: 0 and the first time-out of Dejan Radonjić followed.

The black and whites kept that lead, primarily with a great shot outside the 6.75 line, until Johnny O’Brient entered the game. The American wing center brought energy to the Zvezda team and brought an equalizer with their points (21:21).

However, a new shooting response from Partizan started immediately, and with a triple by Rade Zagorec at the end of the first section, they reached an advantage of 27:22.

Immediately at the beginning of the second part, Josh Perkins also hits a long shot, and the “steam roller” goes to the maximum +8. That advantage was more or less in force in the continuation of the first half.

In the finish of the second quarter, Ognjen Jaramaz also played, since everything started in the Partizan attack. At half time, the result was 46:40.

The second half started with a very solid defense and with a total of seven missed attacks on both sides. Partizan was the first to score, through Erik Mike and Nemanja Dangubić’s triple, so he reached the maximum +11 (51:40).

Zvezda did not know about the point for a full four minutes, when Aleksa Uskoković hit the triple, but the problems continued until Dejan Davidovac took matters into his own hands. He entered the series, and with a triple for 53:51, he completely returned the red and whites to the equalizer.

The game was very “hard” in those moments, so the result before the last and decisive 10 minutes was 58:55 in favor of the trophy defender.

Partizan opened the last quarter better, with five points through Mike and Jaramaz, but a few mistakes caused Zvezda to easily reach the result connection.

We entered the penalty shootout in which literally everyone was safe, which speaks enough about the concentration with which they entered the match, determined to win.

Apart from the end described above, the fact that Partizan had 20 turnovers also ruled. With a few more unnecessary fouls and technical errors, it was enough for Zvezda to turn around and move on.

The Newest: USL’s Indy Eleven to return with restricted followers