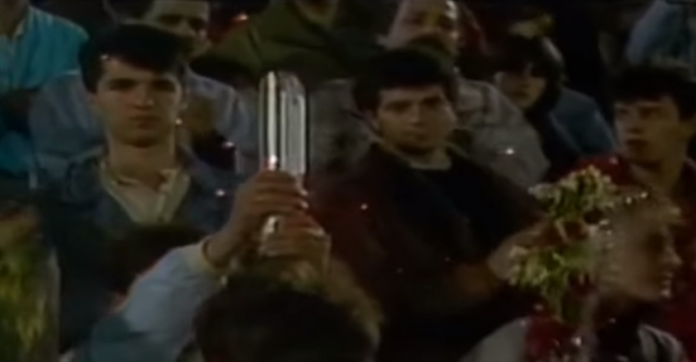 Youth Day or Character Cult (4): 5-legged as an alternative of a swastika

Although Tito died in 1980, the Youth Relay continued to go from hand to hand of thousands of young people from Triglav to Gevgelija, only under a different name “And after Tito – Tito”, with the Yugoslav swearing to persevere on his path and nurture brotherhood. and unity. Carrying the baton lasted until 1987.

The only time the marshal did not attend the handover of the baton at the JNA stadium was in 1978, when it was handed to him at Brijuni. The following year, 1979, Tito attended the celebration for the last time on May 25, and the baton was handed to him by a student from Pristina, Sanija Hyseni, who addressed both Albanian and Serbian. This Albanian woman is now a doctor and lives in Canada. The following year, on May 4, Tito died, and the relay was on its way to Croatia, so it was transferred and laid on his deathbed in the SFRY Assembly. After his death, everything continued with the oath of the Yugoslavs that they would persevere on Tito’s path, and the baton was received by the then president of the Socialist Youth Alliance.

The last relay started symbolically from Triglav, and many believe that the last celebration of the Youth Day announced the disintegration of Yugoslavia, and the last carrying of the relay was accompanied by incredible situations. It all started with a phallus-shaped relay and a copy of a Nazi poster…

The design studio Novi kolektivizam from Ljubljana applied for the then federal competition for the conceptual design of the relay and the poster of the Youth Day and won.

It was made of plexiglass, with eight drops of blood, seen from today’s perspective, they could have indicated the beginning of bloodshed in this area. It was made in the shape of a compartment, and it was supposed to stand on a holder in which there was a video cassette with a message, the holder was supposed to rest on four legs, and the whole composition was to stand on a pedestal in the shape of SFRY. Not only was it very uncomfortable to wear, but because of those four legs, it looked a lot like a hockey stick. The goal was to belittle the event itself, but the relay somehow reached Belgrade in a hurry.

Kozaračko kolo and rock and roll

The 1987 rally was performed by 5,500 participants, under the symbolic name “Turn on the light”. The last relay was Raymonda Broshaj, a student from Gjilan. There were also problems with the script because, among other things, George Balasevic’s song “That orchestra is old, there is no idea in fact”, associated someone with the Presidency of the SFRY. Raymond handed over the baton to the “first young man” Hashim Rexhepi. The last Kozarachko round was also played. The relay also arrived at the rock concert in the Pioneer Hall, greeted with loud applause and music by the groups Leb i sol, Jakarta, Zana, Valentino.

The last rally, but without the relay, was held in 1988. For the next couple of years, on May 25, free concerts were held for young people in the squares, and then that stopped.

At the end of February 1987, a reader of Belgrade’s “Politika”, engineer Nikola Grujić, sent a letter to the newspaper in which he warned of the similarity between Klein’s Nazi work and the posters of the New Collectivism. It is amazing to everyone how the authors did not end up in prison.

Ache much less for Novak, US Open with out line judges

THIS IS HOW FREE TITO HANDED THE RELAY! Aside from the protocol, the “most beloved son” hugged and kissed him, IT WAS NOT THE FIRST TIME THAT THE TWO MET ME / PHOTO /