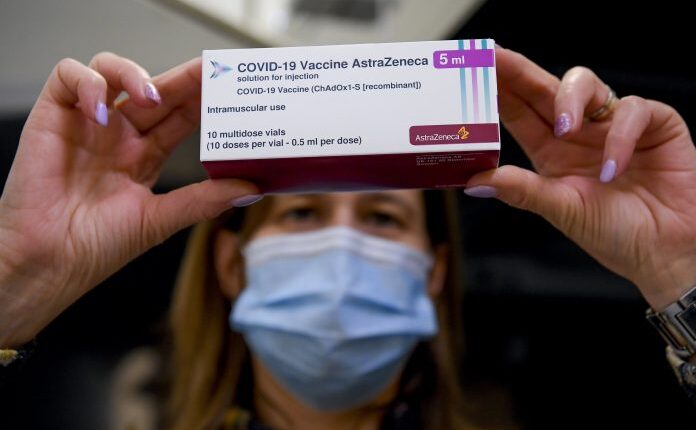 epa08998652 An employee holds a packet of Oxford/AstraZeneca COVID-19 vaccine at the Hajdu-Bihar County Department of Public Health in Debrecen, Hungary, 09 February 2021. Hungary received 40,800 doses of the vaccine and will start the inoculatioon of adults aged 18-60 years. EPA-EFE/ZSOLT CZEGLEDI HUNGARY OUT EDITORIAL USE ONLY/NO SALES

After two cases of infection in hotel quarantines in Melbourne last week, there is growing concern that Victoria’s quarantine system is not well equipped enough to keep mutated strains of the virus.

At the same time, experts are trying to justify the effectiveness of the AstraZenec vaccine against kovid, even though its effectiveness in South Africa was only 10 percent, when it comes to the mutation of the virus there.

Australia has provided 20 million doses of Pfizer vaccine, which will vaccinate the priorities planned in Phase 1a and 1b. These are mainly quarantine workers, health workers, staff and people in centers for the elderly and disabled, people over 70, the indigenous population over 55, the police and workers at high risk, and young people with chronic diseases.

That is close to seven million inhabitants.

Eventually, this vaccine could also cover people between the ages of 60 and 70, of which there are about 2.6 million and are in Phase 2a. That would be the number of 10 million people, as many as are provided with Pfizer vaccines, counting to receive two doses.

For the rest of the population, about 16 million people, AstraZeneca is planned, which will be produced in Melbourne, for a total of 58 million doses. This amount is completely sufficient to cover the complete vaccination of the population.

However, the latest research on the vaccine, which was received by 100,000 South Africans, proved to be only 10% effective on the strain of the virus there, and the Government of South Africa suspended the immunization with this vaccine.

Experts in Australia are of the opinion that any vaccine is better than no vaccine. Then, there are views that there is no South African corona strain in Australia, and that AstraZeneca will be more efficient at home.

It has long been known that the effectiveness of this vaccine is just over 60 percent, unlike Pfizer, which is over 95 percent effective for the original strain of the virus.

That is why the public rightly asks the question: then why is the entire population not vaccinated with a more efficient, Pfizer vaccine?

At the moment, however, there is a huge demand for this vaccine, so that the first contingent of 80,000 doses has not yet arrived in Australia, and it is expected only at the end of February.
On the other hand, AstraZeneca’s vaccine will be a domestic product, but it is still awaiting approval by the Therapeutic Goods Administration (TGA). The first quantities of the vaccine should arrive in early March.

Both companies have already started perfecting their vaccines to respond to new strains of the virus, but it will take time.

One of the options is a mix of two vaccines, which was applied in Great Britain a week ago. Just over 800 people over the age of 50 have been vaccinated with either the Fayezer or AstraZeneca vaccine. Half of the group then received a different dose but different vaccines after four weeks, and the other half received the same vaccine.

According to Mary Louis McClos, an Australian epidemiologist and consultant to the World Health Organization for Kovid-19, that is an option that should be considered.

Without it, there is a risk that people vaccinated with the AstraZeneca vaccine, aged 20 to 39, may not be fully protected against the corona. And that is the age group that is not at the highest risk of serious illness or death from covid, but it made up half of all people who contracted corona in Australia last year.

– They are extremely mobile and are more likely to work in more part-time jobs, which increases the risk of exposure to the virus – McLaughl pointed out.

The EU will not stop vaccines

EU Ambassador to Australia, Michael Palch, promised that the export of crown vaccines to Australia will not be delayed due to the restrictions introduced by the European Union.

There were concerns that orders for vaccines from Europe could be delayed, as the EU set up controls on exports of vaccines produced on its territory. Australia is looking for 20 million doses of Pfizer vaccine, which is produced in Europe, but belongs to an American company.
Ambassador Palch said the vaccines would arrive in Australia as planned.

The government of Western Australia is considering changing the border regulations and easing the currently valid rule that the border with any other country remains closed until 28 days have passed without local transmission of the infection.

According to Prime Minister Mark McGowan, the position of health officials is awaited, who are currently “weighing” whether it would be enough to lift the entry ban after 14 or maybe after 21 days without new corona cases in a certain jurisdiction.
A decision on this issue is expected by the end of the week.