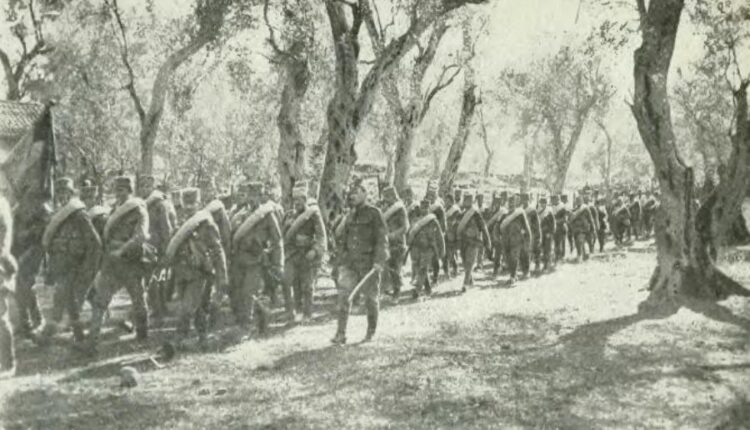 Remembering the feat of Dragomir Grujović (7): He inherited the blood of his grandfather from Thessaloniki

After 30 years, the Slovenes acquitted Dragomir Grujović, a retired captain of the first class, of the accusation that he committed a war crime as a member of the Yugoslav People’s Army in 1991. This finally confirmed that this now 60-year-old Čačanin, as an officer, and his 33 others were only defending a military unit, determined not to allow the military warehouse of Mokronog to fall into the hands of renegade Slovenian territorials alive through them.

Budo Simonović, our associate and author of this feuilleton, then as a reporter for “Ilustrovana Politika”, was the only journalist who reached the barricaded soldiers in Dolenjska in 1991.

Dragomir Grujović, a sergeant of the Yugoslav People’s Army, who at the beginning of July 1991, “due to exceptional sacrifice and courage”, was extraordinarily promoted to officer and received the rank of lieutenant, remained at the scene, in the Mokronog military warehouse in Dolenjska, until his last soldier was not in a safe place until the last drop of fuel was poured and taken away from Slovenia.

He remained in the army for another fifteen years, reached the rank of captain of the first class, and then, in 2005, he retired in vain with the explanation that he did not have a school and professional qualification for a position that covers further advancement in the service.

As soon as he finally took off his military uniform, he returned to his native Čačak, to a peaceful life, and completely dedicated himself to a successful family. However, there was no peace, because a few years later he accidentally found out that he was charged with war crimes in Slovenia in 1994 and that his name has been on the Interpol wanted list since 2007 as a person who is not available to the Slovenian judicial authorities. .

And when, somehow, the indictment officially arrived at his home address, he refused to receive it, explaining that he did not understand it, and the request that the indictment be written in Cyrillic. He saw, however, that he was still facing a battle with windmills, a painstaking and lengthy process of proving the truth and his innocence, proving that he only, in accordance with the oath, the constitution and unwritten patriotic laws and customs, defended the entrusted property, his part of his soldiers and the army to which he belonged. On the advice of friends, however, he hired lawyers, two from Belgrade (Svetozara Z. Pavlovic and Mladen Nenadovic) and Slovenian Borut Skerlj, whose role, it seems, will be extremely important for the final outcome of this process.

As Grujović was unavailable, the case was at one point handed over to the Serbian War Crimes Prosecutor’s Office. Grujović responded to the summons, he was also at the hearing in Belgrade, but he is very satisfied that he was not tried in Belgrade, because someone might think that the verdict is biased.

Realizing, probably, that the accusation of war crime is based on shaky legs and that there are no elements for that serious crime, Slovenian prosecutors “supported” him with attempted murder, infliction of grievous bodily harm and other crimes, but all that did not help – However, the truth eventually came to light, because it was not difficult for Grujović’s defenders to deny all these allegations and point out, which was certainly crucial, that all these alleged “side” crimes were long outdated, even under Slovenian law. In addition, the testimonies of Grujović’s friends and companions from Mokronog (he still communicates with the majority) and especially the then sergeant, the Croat Dejan Kovačević and Corporal Vojislav Pićan, a native of Grblja, were of great importance, as well as the very positive opinions of Slovenes and neighbors. and friends from Mokronog, among whom Grujović lived for more than ten years.

Thus, the High Court in Novo Mesto had no choice but to admit that Grujović was unfoundedly accused of war crimes, ie that he is now a completely free man, and it is interesting that they even granted his request and wrote the verdict in Cyrillic:

– And now, in a similar situation, regardless of everything I experienced and survived, I would act as I did 30 years ago – says Grujović. – My grandfather, after whom I am named, was from Thessaloniki, and I did not inherit only the name from him, but it is the same blood and it’s all in vain, it doesn’t change easily…

Grujović and his boys barricaded in the Mokronog warehouse were not allowed to turn off electricity, water or even a civilian telephone for the whole time:

– In this way – says Grujović – I enabled my soldiers to call their relatives every day, because the Slovenes are spreading great propaganda about how I am holding the army here by force, under the threat of weapons, torturing and abusing it. And when any of the relatives call them, I make sure to talk to them and approve them. The other day, the aunt of one of the soldiers called. I didn’t introduce myself to her, but I tell her not to worry about anything. God knows how she thanks me and says I’m a nice person, and then she adds:

– You know, I’m just afraid of that crazy Grujović…

Later, when I explained to her that I was the “crazy Grujović” from Slovenian propaganda and when the soldier personally confirmed to her who I was and what I was like, there was no end to the apology…

The irony of fate

There was no end to Grujović’s astonishment when he learned much later that Captain Furlan still survived and that he reached the rank of brigadier, ie general. And only when he recognized him on television in an official delegation of the Slovenian Armed Forces, in which, as the Deputy Chief of the General Staff of Slovenia, he visited the Serbian Army.

– That is the irony of fate – Grujović says angrily.

– The traitor managed to adorn himself with general’s epaulettes and sit in a high military position, and I, who thwarted him, betrayed him – to retire and to the list of war criminals!