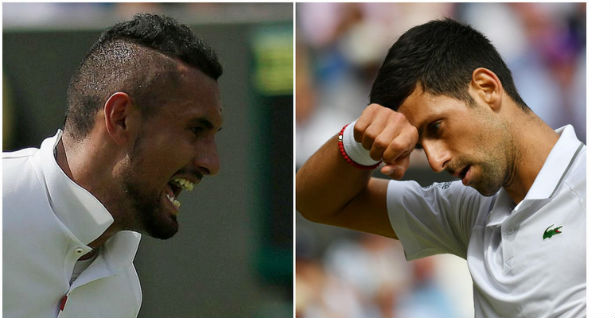 “MA, YOU’RE THE FIRST TO COME TO OUR MIND WHEN WE THINK ABOUT IT!” Kirjos slapped Djokovic, the followers crucified him!

“MA, YOU’RE THE FIRST TO COME TO OUR MIND WHEN WE THINK ABOUT IT!” Kirjos slapped Djokovic, the fans crucified him!

Nick Kirjos, when he has nothing to do, and when he has, likes to provoke Novak Djokovic.

Now that the best tennis player in the world has continued his unbeaten streak this season, interrupted by the SARS-CoV-2 coronavirus pandemic (during which he repeatedly condemned Djokovic’s attempt to support white sports in humanitarian tournaments, and at the same time ridiculed when Nole and his coach Goran Ivanišević infected on the mentioned Adriatic tour), the Australian national team player spoke again. He did that when he heard that Novak Djokovic was talking about a series of triumphs.

Asked after the second triumph in New York if he could remain undefeated until the end of the season, in which he is now 20-0, Nole said:

“Anything is possible … I wouldn’t want to rule it out, because we don’t know what the competition will look like after the American tour, but … it’s far away. It’s not my goal, to be undefeated, but I wouldn’t mind it happening “.

Nick Kirjos wrote: “Hell of a tennis player. He could remain undefeated in 2020, I can’t take that away from him. Unfortunately, when he had to show leadership and moderation, he accepted defeat no matter what.”

Kirjos, wanting to point out who knows how many times “a true tennis leader would not organize tournaments during a pandemic” (although they were organized in accordance with the then current health regulations of the host countries), such a word, and not for the first time, caused quite a stir among fans of ‘white sports’.

There were really different comments.

From, short ones like “you are, brother, hater”, to longer ones in which he is accused of inappropriate behavior with which he marked his own career – disrespect for rivals and the audience, breaking chairs, quarrels, giving up matches.

In that sense, one of the most witty answers Kirjos received was:

“Because, for everyone who thinks of leadership and moderation, Nick Kirjos comes to mind first,” wrote one Lorin.