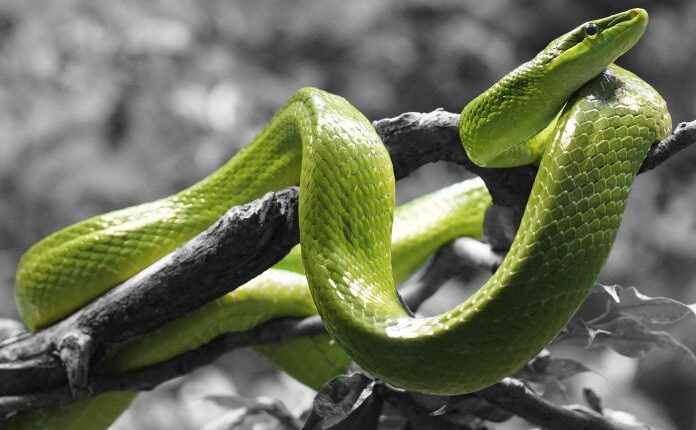 All modern snakes are made up of several specimens that survived the impact of a giant asteroid that destroyed dinosaurs and most other living things at the end of the Cretaceous period.

When a huge celestial body hit our planet 66 million years ago, the dinosaurs were cleansed. Surviving animals (mammals, birds, amphibians and some fish) have spread to new territories, evolved and become species that live with us today.
However, until recently, it was not known how the Cretaceous-Tertiary extinction specifically affected snakes. A new study published in the journal “Nature” revealed that all today’s species of snakes, of which there are about 3,700, evolved from a small group of reptiles that managed to survive an asteroid impact.

With the help of fossils, the study analyzed the genetic differences between modern snakes in order to reconstruct the evolution of these animals. Analyzes have helped determine the exact time when modern snakes began to evolve. Scientists have discovered that these reptiles began to diversify immediately after the Cretaceous-Tertiary extinction.

Scientists believe that the ability of snakes to hide underground and survive without food for a long time helped them survive the devastating effects of the impact. The extinction of their competitors – including other snakes and dinosaurs themselves – has allowed these predators to move to new habitats and new continents.

These reptiles then began to diversify and so cobras, pythons, boas and other species emerged. The modern variety of snakes – including tree snakes, sea snakes, venomous hops and cobras, huge snakes like boas and pythons – appear only after the extinction of dinosaurs.
Fossils also show a change in the shape of snake vertebrae as a result of the disappearance of some Cretaceous characteristics and the emergence of new groups, including giant sea snakes up to 10 meters long.

“This is extraordinary because snakes not only survive an extinction that kills so many other animals, but evolve within millions of years, using their habitats in new ways,” said study lead author Catherine Klein.

Research shows that snakes began to spread around the world at this time. For scientists, the devastating mass extinction was a kind of “creative destruction”, which allowed snakes to diversify into new territories previously occupied by their competitors.

The study also states that at that time, snakes began to spread all over the world. Although the ancestor of modern snakes probably lived somewhere in the southern hemisphere, it appears that snakes first spread to Asia after mass extinction.

The study also found evidence of another major diversification event at a time when land was moving from a warm greenhouse to a cold “glacial” climate, leading to the formation of polar ice caps and the onset of ice ages.

The patterns observed in snakes indicate the key role of catastrophes – severe, rapid and global environmental disturbances – in the movement of evolutionary change, writes Sputnik mundo.