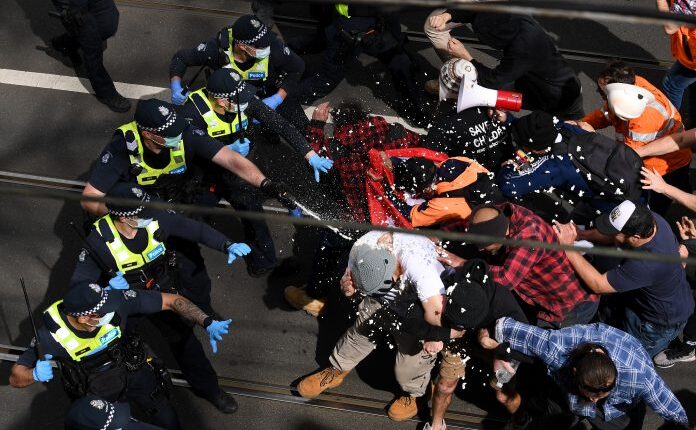 Thousands took part in protests against strict closure measures, which took place across Australia on Saturday, despite police intentions to prevent rallies.

On the streets of Melburn, there was fierce clashes of police officers and demonstrators, in which dozens of people were injured, and over 200 people were arrested.

Victoria Police, according to their own words, had the largest operation in the last 20 years, since the World Economic Forum in Melbourne in 2000. 2,000 law enforcement officers took part in the action, whose task was to prevent citizens from marching on the streets at any cost.

In the previous days, the representatives of the authorities tried in all possible ways to prevent the arrival of the demonstrators in the center of Melbourne. Thus, the city traffic was suspended in the period from 7.30 in the morning until two in the afternoon.

In addition, a so-called “steel ring” or police barricade was set up around the city center. The intention was to prevent a recurrence on August 21, when more than 4,000 people gathered in the city to protest.

All vehicles that tried to enter the city were stopped at police checkpoints and each citizen was individually checked for entry into the city center.

Despite extensive police measures, hundreds of protesters gathered in Melbourne, according to a report by most media outlets. What surprised the police was the change of the protesters’ plan and the relocation of the demonstrations against quarantine from the very center of the city to the suburbs of Richmond, in the inner north.

It is stated that the participants received encrypted messages that the location of the protest walk was being moved from the center to Richmond. Protesters marched along the suburbs until they were greeted by a cordon of police, after which citizens took to the streets chanting, “You are serving us.”

On several occasions, police managed to break protesters to smaller groups. Among the gathered citizens, there was a small group of aggressive demonstrators who entered into an open conflict with the police. Members of the public order authorities used batons and pepper spray sparingly in the conflicts, in order to disperse the gathered citizens, and 235 people were arrested.

Police said they arrested 193 people for violating public health regulations, while others were arrested for a number of offenses, including assault on police, riots, weapons and drug use.

Ten police officers were injured in the protests, six of whom were transported to the hospital where they were given help. The three were kept in hospital due to broken bones or broken muscles. Police explained that oysters, bottles and other objects were thrown at them. There are no data on the number of injured demonstrators.

No expected protests took place in Sydney on Saturday, but police still arrested 32 people across New South Wales, including 20 in the capital. Also, 265 misdemeanor fines were issued for a number of different misdemeanors, which included a fine for not wearing mandatory face masks.

Police flooded the city on Saturday due to rumors of possible rallies against orders to lock the city. About 1,700 police officers were deployed across the state to prevent the protests. About 250 people gathered in Byron Bay, however, to protest in the streets, and 11 people were arrested.

Around 2,000 people gathered in Perth to protest against locks due to covids, and some protesters carried placards calling for an end to the policy of compulsory vaccination, which is being pursued by some of the largest companies in the country and calling for the opening of state borders.

Among the posters were those depicting the Prime Minister of Western Australia, Mark McGown, as Adolf Hitler. Despite the large presence of police forces, the protest passed without violent scenes, which could be seen in Melbourne.

Against the “Orwellian scenario”

Peaceful protests were also held in Adelaide, Brisbane and the Gold Coast. More than a thousand people gathered in Randle Park in Adelaide, who then marched through the central streets of the city. One teacher was greeted with applause, who was allegedly fired because he told the students that they did not have to wear masks.

A large number of anti-home quarantine control passwords have been seen using an application with face recognition software. “Let’s bring Orwell back to fiction” and “1984. is not an instruction ”are just some of the messages that indicated that what was happening in South Australia resembled the script from the famous book by George Orwell.