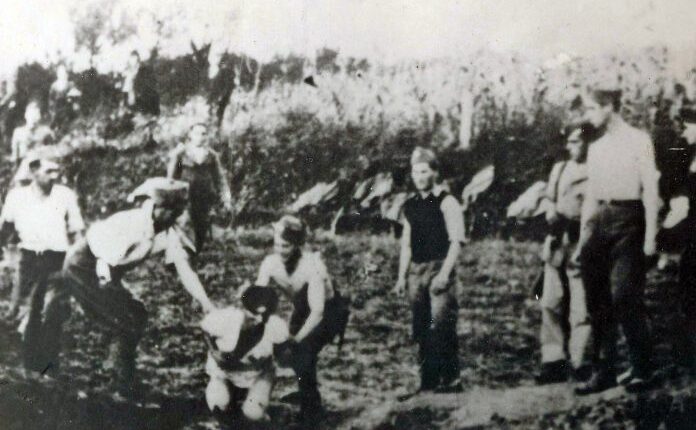 Eight many years for the reason that institution of the Jasenovac camp – unpublished testimonies (3): “Look” earlier than liquidation

Throwing detainees into a pit (Jasenovac 1942)

Vojislav Prnjatović, a Serb from Sarajevo who managed to survive the hell of the largest and most monstrous concentration camp within the Independent State of Croatia, continued his testimony to the Commissariat for Refugees and Immigrants in 1942, explaining that the mass executions took place in a cemetery. liquidations were carried out in order to empty the camp.

“Such liquidation was carried out during the so-called performance (choir). I have experienced such three ‘performances’. On January 1, the number of Serbs in the Jasenovac camp rose to about 450 people. Together with the others, there were only about 1,100 of us. New transports were arriving and the camp was to be emptied. On the morning of 2 January, detainees were ordered to ‘perform’. When we lined up in front of the barracks, the Ustashas came and began to search the detainees. They separated them into a special group. This time, they chose 65 Serbs, mostly older as well as those who seemed less able to work. These were designated for ‘liquidation’, ie. for killing in the cemetery. It is a horrible, unbearable, and in no words descriptive feeling, which overwhelms a person, when he is in a ‘performance’, from which the victims of ‘liquidation’ are taken out. Any of those in the ‘performance’ can be selected at any time. I barely recovered from that first performance, when on January 3 we were again invited to perform and be selected, then 140 Serbs were again taken by wire to the cemetery. On that occasion, horrible scenes are created that I don’t need to talk about, because I can imagine. From those I knew, Vojo Erić, a merchant from Sarajevo, Jovan Bećir, a retired colonel, and Milutinović and Ružić, money changers from Sarajevo, were selected and killed on January 3. I remembered you, because they came with me in a group from Sarajevo, and I knew the other victims from the camp, but I did not remember their names, because I was only in the camp for a few days at that time. “

Prnjatović states that the second “appearance” of all Jasenovac detainees was in mid-January 1942, when the selection of who should be killed and who did not be made personally by Vjekoslav Luburić, Ustasha captain and commissioner for the camp of Chief Ante Pavelić.

“Each detainee had to personally stand in front of him and tell him his profession. Behind my back stood an old and more experienced detainee, who whispered to me to declare that I was some artisan, I immediately understood what it was about so I obeyed him. As I know how to drive a car, I stated that I am a car mechanic. That saved my life that time, because Luburić separated all those who seemed incapable of work to him, then merchants, clerks and other intelligentsia, ie those whose professions could not be useful for the work done in the camp. On that day, Luburić selected over 200 people, who were not taken to the cemetery, but were transferred to the former old Jasenovac camp Krapje, where they were killed on the same day. “

This witness also explained that apart from mass and individual murders, all of them were seriously ill in the Jasenovac camp.

“Severe patients, even though they knew exactly what awaited them, could not avoid it without asking for help from a doctor in an ambulance or hospital. After 10-15 days, up to 100 people usually accumulate in the hospital until the death of the tortured, exhausted and other seriously ill patients. When a large number of them gathered there, usually before the evening of the Ustasha, they threw the sick out of the hospital and killed them with mallets and axes, whenever in front of the hospital itself, sometimes in the cemetery. The already mentioned merchant from Pakrac, Paković Marković, died of exhaustion in our barracks, because there was no hospital at that time, while his sons, as I have already said, ended their lives in this way. “

Incinerations in the Brickyard

Witness Prnjatović states that from the second half of March 1942, when Jasenovac and the camp were hit by large floods that affected not only part of the barracks but also the cemetery, the Ustashas changed their strategy and instead of burying them, they burned them in a brickyard.

“The last groups, who came from Brcko, Tuzla, Doboj and Derventa before I left the camp, were burned in the brickyard, as they were previously mostly strangled with wire around their necks,” the survivor said in his testimony.

Prnjatović states that in addition to mass killings, individual murders took place in the camp on a daily basis, which he describes as a “regular and common occurrence”.

“Death was the only punishment for any, even the smallest offense of a detainee (for stolen one potato, corn, at least involuntary disobedience, etc., equally if the detainee, due to exhaustion, knelt down or fell at work and did not get up immediately, Ustasha and killed him). I did not remember the names of those killed in this way, one because of their large number, and the other, because I did not have the opportunity to hang out with people, fellow passengers in the camp, so I did not even know them better, “the detainee told the Commission.

“As for me personally and my life in the camp until I left, I am after two days of Catholic Christmas, that is. On December 27, he was assigned, like the others, to work. In the beginning, I worked on external works. It works from seven in the morning to seven in the evening. There is an hour of rest only at noon during lunch. Lunch is served in the field regardless of the weather and the end of winter. I don’t think I should even mention how weak the food is: in the morning only sometimes ‘ajnpren’ soup without fat, for lunch bean or cabbage soup without any spices, and in the evening rare beans or cabbage, or unpeeled boiled potatoes. We didn’t even see the bread until March 22. Since then, we have received a quarter of corn bread (200 grams) a day “, said Prnjatović.

Tomorrow: Eight decades since the establishment of the Jasenovac camp – unpublished testimonies (4): Arrival of the special commission

Chinese language vacationers say ‘I do’ to Serbia – Information