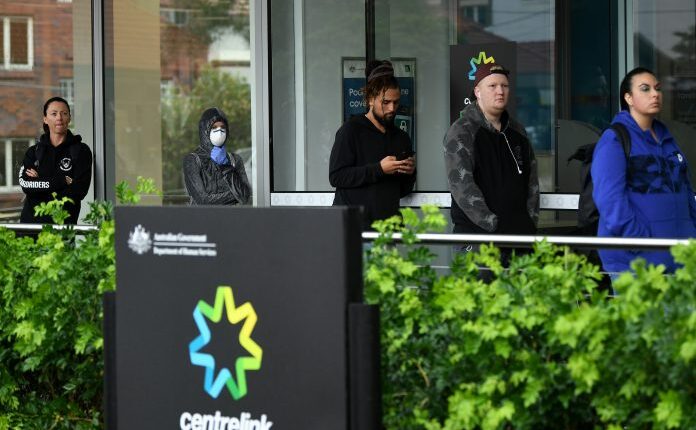 An honest enhance or a merciless joke?

JOBSEEKER The ranks of the unemployed in front of Centrelink

Australian Prime Minister Scott Morrison has announced an increase in unemployment subsidies while looking for a job (JobSeeker) by $ 25 a week. Morrison assessed this increase as “appropriate”, although it starts on April 1, when the temporary supplement of $ 150 for two weeks, which was introduced in April last year due to the corona pandemic, is abolished.

Practically, the unemployed will lose the $ 150 bonus from April 1, and will receive an increase in the basic JobSeeker amount by $ 50 on a two-week basis, which means that they will receive significantly less money than during the last year.

In addition, the Federal Government will require recipients of unemployment benefits to do more in order to qualify for payment at all. Responsibilities will include monthly job search, face-to-face meetings with employment services and more intensive training for long-term unemployed.

The base for JobSeeker has been increased from $ 565 to $ 615 fortnightly.

This means that 1.95 million Ozies, who are currently on working age payments, will receive an incentive, including those on JobSeeker, Parenting Payment or Youth Allowance, or Austudy. .

For childrenless children, the maximum payout is currently about $ 282 per week. This payment will increase to 307, or 614 dollars for two weeks, from April 1, while other payments, such as rent and energy allowance, will continue to flow.

However, the “pandemic supplement”, which currently amounts to $ 75 a week, and which was received by over a million Australians, ends on March 31, so that, on the whole, the recipients of benefits will receive less money from the beginning of April.

In addition to increasing the base, the plan includes raising the payout threshold before benefits begin to decline, which practically means that state aid recipients will be able to work and earn more before social benefits start to be reduced. It is estimated that this will cost the state nine billion dollars in the next four years.

What do recipients have to do?

While in the midst of the pandemic, the obligation of the recipients of the allowance to see the competent person for employment was suspended, now they will again be obliged to meet regularly with these services.

In addition, the number of job searches that the recipient must undertake will increase from April to 15 per month from April, and then to 20 from July. Also, employers will now be required to report JobSeeker program recipients who decline a job offer.

After six months of receiving the first payment, the recipients will enter an intensive phase of training, to improve their skills and gain work experience, in order to find employment more easily.

Prime Minister Morrison is of the opinion that this increase, from $ 3.57 a day, is appropriate, having in mind that Australia is recovering from the pandemic and returning to a “more normal environment”.

Morrison has been under pressure from business leaders, civil society and other political parties to increase the JobSeeker rate. However, the unemployed in Australia are outraged by the modest increase and describe it as a “heartless betrayal” and a “cruel joke”.

– The government missed the opportunity to be a government that stands for human decency, for human dignity. What we have now is the heartless betrayal of millions of people affected by unemployment – said the executive director of the Australian Council of Social Services, Cassandra Goldie.

Many point out that the base for payment has not changed for 20 years and that this was the moment for the increase to be far greater. Economist Chris Richardson of Deloitte Access Economics also agreed that the increase should have been more significant.

But Social Services Minister Anne Ruston said the increase must strike a balance.

– We need a system that is fair and sustainable for the people who need it, as well as for the taxpayers who pay it – Raston pointed out.

The proposal has yet to go through parliamentary procedure to be adopted.

It has been said that if there is an increase in the JobSeeker base, it will help to abolish additional payments. However, they remain for now. Supplemental payments included an energy supplement starting at $ 8.80 fortnightly for one person and received by all job seekers, as well as a drug supplement of $ 6.20 fortnightly.

Below the poverty line

Cassandra Goldie, executive director of the Social Services Council, said before the government’s decision that “the main thing the government should take into account is that job seekers have enough to cover basic expenses, including housing, groceries, transportation and medical expenses.”

That was the reason why Goldie advocated an increase in the base of the allowance of at least 25 dollars a day, which would exceed the poverty line and approach the pension rate, which, as she says – “used to be the case”.

Serbia to hitch the EU when either side are prepared, leaders say – EURACTIV.com

JELA FROM JASENOVAC STILL LOOKS FOR BROTHER ILIJA: These are paperwork in regards to the destiny of Serbian kids in Ustasha camps, PICTURES OF HORROR NEVER FALL