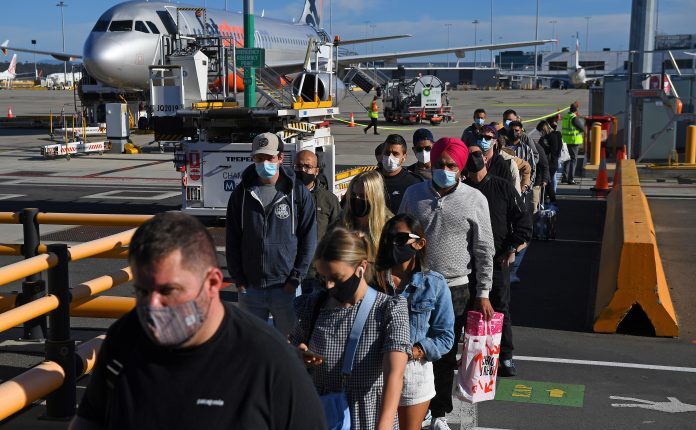 Several tens of thousands of holders of temporary visas in Australia have signed a petition against, as they stated, “discriminatory policies of the Australian government” not to allow them to leave the country freely and to return again later.

At the same time, citizens and permanent residents are allowed to enter and leave the country if they are fully vaccinated. Also, vaccinated tourists from Singapore and New Zealand will be able to enter Australia in November.

Holders of temporary visas, who work, study and live in Australia, are still not allowed to leave the country and then re-enter the country, unless they have a special exemption. The petition has so far been signed by over 40,000 people.

On March 31, 2020, there were 2.17 million foreign citizens in Australia on various temporary visas. According to the Interior Ministry, there are currently at least 1.6 million temporary visa holders across the continent.

In October, the Minister of the Interior, Karen Andrews, announced that the opening of Australia’s international borders would be organized, with Australian citizens and permanent residents having priority.

– Qualified workers who can come to the country follow, then international students, and finally travelers from abroad – Andrews pointed out.

The minister said she understood that many temporary visa holders had been separated from friends and family for months, noting that restrictions would be further eased in the coming weeks and months as the vaccination rate continued to rise.
However, neither Minister Andrews nor the Ministry of the Interior answered the question why the passengers from Singapore and New Zealand were given a time limit to enter Australia, while the temporary residents of Australia – were not.

This fact especially affects all fully vaccinated holders of temporary visas, because they believe that by receiving two doses they have fulfilled the condition for leaving and entering the country, so they expect at least a date from the state when they will be allowed to do so.

According to many foreign nationals on temporary visas, by vaccinating many, they contribute significantly to the immunization rate in Australia, and also pay taxes and do whatever the state asks of them, and see no reason why Australia does not equate them with people with permanent residence, when it comes to free exit from the country and return to Australia.

According to a recent survey, it has been confirmed what is often heard, that holders of temporary visas are not treated as key members of the community.

Namely, researchers from the University of Technology in Sydney (UTS), the University of New South Wales (UNSW) and the organization Immigrant Workers’ Justice Initiative published a report “As if we were not human: abandonment of temporary migrants in Australia during the Kovid pandemic in 2020.”

The survey included 6,105 temporary residents and most said they experienced various difficulties, such as not having a place to live or work because they were not part of the Australian government’s financial assistance package, and the package initially included only citizens and permanent residents .

According to Dr. Lori Berg from UTS, the exclusion of the owners of temporary visas from the November plan to reopen the country only confirmed the position of the Australian government.

– It seems that the government is again treating the holders of temporary visas as a source of income, and not as necessary or key members of the community – Dr. Berg pointed out.

The federal government pointed out that after the opening of the country, the labor force is an essential part of Australia’s economic recovery plan. However, some countries have already set out to hire temporary workers for their long-term economic recovery plans, such as New Zealand and Canada, while Australia has not yet done so.

It remains to be seen whether the government will simplify the procedure for issuing visas and the arrival of new immigrants, especially skilled workers and those engaged in highly sought-after occupations.

Also, for now, there are no indications whether the way for obtaining temporary residence in Australia will be simplified for holders of temporary visas, which a good part of them ask from the state authorities.

Message for the Prime Minister

The petition states that many temporary residents, who work in hospitals, old people’s care centers, child care centers and supermarkets, are losing hope that they will be able to stay in Australia as their visa expiration date approaches.
“Prime Minister Scott Morrison and the Australian government have recently acknowledged that migration is key to economic recovery after a pandemic. “Now is a great time to put the government’s words into action,” the petition reads.

Green Party leader Adam Band said the plan to reopen the country includes “double standards”, especially given that many visa holders had a legitimate reason to travel abroad.
– It seems that the government has no problem allowing billionaires, like Andrew Forest, to come and go as they please, but when people want to go abroad for a funeral or maybe see their parents or loved ones for the last time, the government will let them down and not allow them to do that – the Band pointed out.

They do not require special treatment

The Adam Band said that many visa holders are in a difficult position because “if they leave Australia, the door closes behind them”.
– We do not call for special treatment. The government should only give the people who are stuck here, far from their loved ones, the same rights that they give to the citizens of Australia.