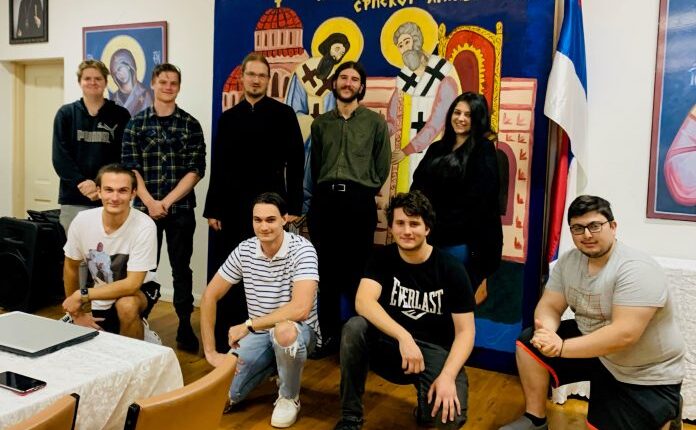 Last Tuesday, the “Association of Orthodox Christians”, a student club within the local university (UOW), was founded in the Church of St. John the Baptist in Wollongong.

This interesting initiative originated from the Serbian parish of St. John the Baptist, led by Archpriest Branko Bosancic, and aims to spiritually connect young Orthodox and those interested in the ancient faith, and is open to anyone who wants to discuss topics about Orthodoxy, the relationship religion and science, interpretation of the Bible and the like.

Speaking about the reasons for founding the Association of Orthodox Christians, Father Branko Bosančić, in an interview with “Vesti”, first pointed out the problem of distance of young people from the church throughout Western civilization, as well as the reasons for such a phenomenon.

– The well-known American Center for Research on Religious and Other Social Issues “The Pew Research Forum” conducted a survey on the topic of why young people are moving away from the church. Although it was to be expected that the main reason would be cases of abuse or sexual scandals that took place in, say, the Catholic Church, this reason is ranked only in the fifth place, in all denominations. The main reason for the alienation of young people was the view that Christianity and science do not go together, and we have that case in Australia as well. Our wish, as an Association, is to show that Orthodoxy and science go hand in hand, starting from the basis that Orthodoxy is the oldest intellectual tradition in the Western world. Orthodoxy has given birth to the greats on whom our civilization rests, such as John Chrysostom, Jerome, Augustine, Basil the Great, Damascus, Gregory of Palamas. father Branko.

The founding assembly of the Association was attended by 15 members from the UOW whose diverse backgrounds speak best in terms of how much young people are interested in the Orthodox Church and in Australia. In addition to students of Serbian roots, this club also gathers their colleagues of English, Greek and Arab Christian origin.

– With its diversity, our association fully fits into the broader picture of Australian society. As the name of the Association says, it is a club that gathers everyone who is either already an Orthodox Christian or is simply interested in the faith. So everyone is welcome. As the newly elected Serbian Patriarch Porphyry emphasized in his introductory speech, we are called to “proclaim peace to all nations” and repeated “To all nations”, adding “to all people of good will because every man was created as an icon of God”. That is how we started our association and started in the hope that we will succeed because people, especially young people, want to talk and actively get involved in the authentic, uncorrupted Orthodox Church, realizing how its message is and how relevant it is for the world we live in.

Father Branko explains that the condition is that the members of the Association must be students of the University of Wollongong, but that this does not exclude all others who want to attend and participate in the discussions.

– We already have two 16-year-olds. Although they will not be officially able to be members, they will attend our gatherings, which we will hold on Tuesday evening at 7 pm in the Church of St. John the Baptist, when we normally hold religious education classes. Everyone is welcome to join us, the doors of our church are open to everyone, and soon, in addition to meetings in the temple, when classes begin, we will have gatherings at the University, within the campus, because we want our gatherings to be public and visible. more young people had a chance to join us.

As provided by the Statute of the Association of Orthodox Christians, Father Branko Bosančić will be the clergyman of this club as the pastor of the Church of St. John the Baptist in Wollongong, under whose spiritual auspices the Association was founded.

Dylan Thomas was elected president of the Association, Chris Mayter was elected vice president, James Vinn was elected secretary, Milos Daljac was the treasurer, and his deputy Esteban Rodriguez Ognjanov was elected.

– Miloš and Esteban are currently the only members of the Board of Serbian roots, while the others are of Australian, Greek and Lebanese origin. I sincerely believe that, after the meetings on the campus begin, we will have more students and members interested in the Orthodox faith – Archpriest Branko Bosančić pointed out.

The Association of Orthodox Christians is the first club of Orthodox believers within the University of Wollongong, but similar organizations of other religions already exist as part of this higher education institution.

– The university is open for such associations and even most clubs are of a religious character. For example, there are already clubs of Anglican and Muslim believers. The University gives the Statute to the associations and the only condition is that each association respects the provisions prescribed by this educational institution – Father Branko explained, emphasizing that the goal of the Association is of a missionary character.