Eagles can by no means go – Information on-line

The Eagles goalkeeper Chronopoulos is protesting after a controversial situation

In the seventh round of the NPL2 NSW, the White Eagles competed with Spirit and repeated a good game, as in the previous round, but unfortunately with the same epilogue as seven days ago – an identical 2: 3 defeat.

It is difficult to accept defeat in a game when you outplay your opponent, and it happened to the Eagles two weeks in a row and now they are already far behind the leading teams in the table. Bonirig recorded his last victory on March 13, and since then – two draws and three defeats.

The very beginning of the match against Spirit indicated that the guests from northern Sydney would be dangerous. In the introductory minutes, the cunning Gofri Lino escaped Sam Galaway, followed by a shot but over the goal.

Soon, the Eagles consolidated their ranks and put in more speed, and the leaders of the game were the cheerful captain Miller and the robust striker Aaron Peterson. It was Miller who had his first chance, but he was almost inaccurate. Peterson broke through on the wing in the 13th minute and entered the box, but he sent a shot near the goal.

The same player sent the ball over the goal in the 33rd minute. As if on a tape, Peterson broke through from the left flank again, a cross shot followed, and the ball reached Miller, who was beating over the goal from some 7-8 meters.

Shortly afterwards, after a short “header”, the ball reached Radovan Pavićević, but a little out of his reach, so he only managed to hand it to the guest goalkeeper with his head.

In the first minute of the match, the most mature chance in the game was seen. After the combination of Miller and Peterson, they both shot one after the other, but the goalkeeper defended the guests both times with incredible interventions. After the already worn-out phrase that a penalty will follow for missed chances, the guests’ counter-attack followed and a 1-0 lead in the 52nd minute.

Only two minutes later, Pavićević broke out “one on one” with the goalkeeper, but slipped during the shot and sent the ball over the goal. In the last half hour, Asmir Kadrić replaced Pavićević, and soon after this change, Jude Claire lost Peterson, who scored for 1: 1. The celebration due to the equalization did not last long, because after the failed offside trap of our team, the dangerous Gofri Lino ran half the field and after the first defense of Chronopolos from the second attempt, he hit the net. Admittedly, eyewitnesses who were in line with the players claim with certainty that Lino was offside, but the referees did not think so.

Ray Miller, who knows how many times in a red jersey, was the best when it was most needed. Thus, in the 80th minute, he masterfully hit the fork of the guests’ goal for 2: 2, almost from the out line. It was boiling then in the stands and on the field in Bonirig. It was as if everyone was expecting a complete turnaround.

However, in the 90th minute, another cold shower followed when the Spirit attacker overtook our football players on the Orlov’s five-pointer and effectively sent the ball to the right side of the goal for 3: 2 with a jerk of his head. There was no time to save.

The impression is that bad luck continues from last season, when Bonirig dropped a large number of points in the last moments of the match. Everyone in the camp of the Serbian club hopes that next Saturday, on their field, the Eagles will make up for a part of what they missed and will charge the Guild’s Mountain Wanderers. This match is on the program on Saturday, April 24, at 6.30 pm in Bonirig. 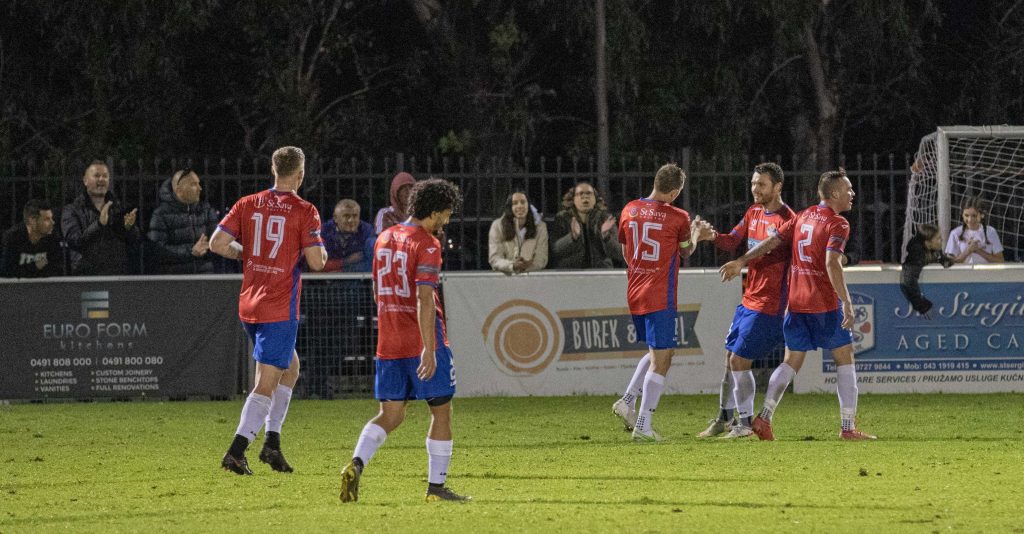 The joy of shortness of breath: Congratulations to Miller on the master goal

A formula for success is sought

The novelty in Bonirig’s game was that Radovan Pavićević started the game in attack, which has not happened often since he joined the Eagles a year ago. His contribution in an hour was quite solid and he deserved more than a passing grade, which is also evidenced by the applause from the stands when he left the field. Also, the talented Juda Claire was the starter instead of Tauli, which gave creativity to the Serbian team.

On the other hand, the absence of two key defenders, the injured Goran Šubara and the suspended David Vranković, apparently cost our team dearly, which was seen in a couple of critical moments when it was scrambling in defense, especially in the third goal when Spirit was too easy to jump. games scored a goal.

Bonirig tonight in the FFA Cup

The Bonirig footballers have a new exam tonight, but this time in the FFA Cup. The Eagles will start their participation in this year’s edition of the most massive competition in the fourth round. The Serbian team is visiting the amateur team of FC Lane Cove in Blackman Park in Lane Cove, and the match is scheduled for 8 pm.

Arrival of first vanguard of Umrah performers | THE DAILY TRIBUNE

Storm round minors in Brus – Minister Vulin ordered an investigation!