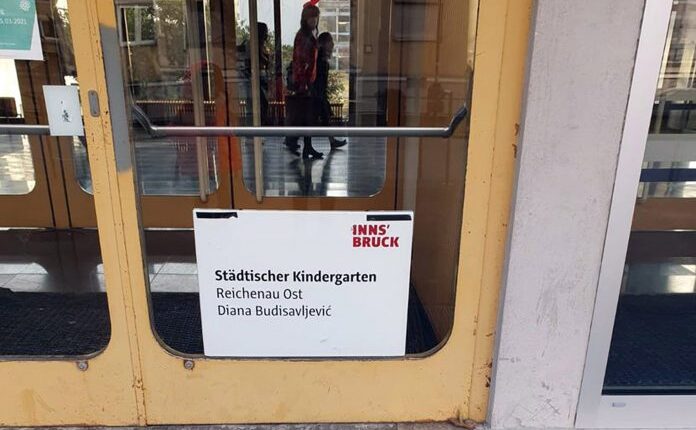 The decision of the authorities of the Austrian city of Innsbruck from the end of last year to rename the city kindergarten in Burghard Breitner Street into “City Kindergarten Reichenau East – Diana Budisavljević”, was implemented this week. A board with the name of Diana Budisavljević was placed on the kindergarten, although it was temporary, at the bottom of the front door. This officially paid tribute to the woman who saved more than 15,000 children, primarily Serbian children from the Ustasha camps of the Independent State of Croatia during the Second World War.

SPOJI welcomed the decision of the city authorities from the end of last year to rename the city kindergarten in Burghard Breitner Street into the City Kindergarten Reichenau East – Diana Budisavljević, and in a letter to the Senate and the City Culture Committee she pointed out that it is very important for the culture of memory. it also takes a certain amount of courage to rename the kindergarten, which has so far been named after the Nazi doctor Burghard Breitner, after the Innsbruck children’s savior.

We also welcome the correctly written name of Diana Budisavljević, because it is the only correct version that Diana used after her marriage to Dr. Julij Budisavljević, although it would certainly not be wrong to add “girl Obecker”. It also says the same on her tombstone in Inzbruck’s Western Cemetery. “Budisavljević” with a hyphen above the letter “ć” makes us happy, because the same hyphen is often ignored. For many, it is just a trifle, but for us, who already represent the third or even fourth generation in Austria, it is of great importance and testifies to great respect, “said SPOJI during the decision of the city authorities to name the kindergarten.

However, they also point out that the name of the street in which the kindergarten is located is left, after Burghard Breitner, with all the necessary signs that indicate his Nazi past and acts against humanity.

However, SPOJI regrets that the text on the appointment of the kindergarten, which was published in the official gazette of the city of Innsbruck, “Innsbruck informs”, does not mention a single word that it is about tens of thousands of mostly Serbian children, who were saved by Diana. The organization emphasizes that they do not want to present Serbs as eternal victims, but that the intention is to respect the principle of modern culture of remembrance, which states that it is necessary to make it clear and precise who the victims were.

Memorial plaque on the birth house

By the way, the Senate of Innsbruck unanimously decided at the end of November last year that the memorial plaque, which should be placed on the birth house of Diana Budisavljević, states that she “saved mostly Serbian children from the NDH camp”. This is the final version of the text for the memorial plaque, whose installation on the house of the Obekser family in the center of Innsbruck was postponed due to the coronary virus pandemic. The text was controversial because of the mention of “Yugoslav camps”, which was changed from “NDH camps” and where the text mentioning “rescue of children” was changed to “rescue of mostly Serbian children”.

Diana Budisavljevic, of Austrian origin, was married to a Serb, a doctor Julijan Budisavljevic, a Serb from Croatia, and with the help of some other individuals who supported her, she rescued children from concentration camps in the Independent State of Croatia. Historians, including Horst Schreiber, an expert on the culture of memory, confirm that he is one of the most important personalities in the capital of the province of Tyrol.

The children she tried to save were mostly Serbs from Kordun, Kozara, Croatian and Bosnian villages. That action was one of the most difficult and in terms of the number of saved the most extensive humanitarian actions related to concentration camps in the Second World War. 3,254 children died, during the rescue or immediately after leaving the camp, exhausted by torture, starvation and disease, while more than 12,000 rescued children survived the war.