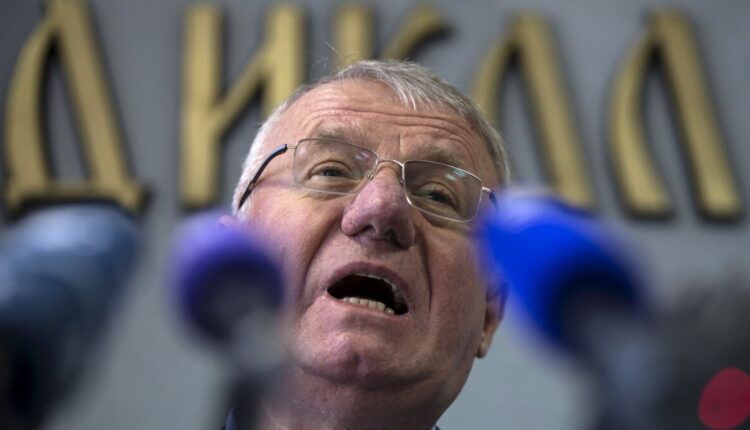 A Croatian parliamentary delegation canceled a visit to neighboring Serbia on Wednesday after a far-right leader convicted of war crimes reportedly stamped the Croatian national flag and shouted insults.

The delegation said it had decided to return home with the leader of the Serbian Radical Party, Vojislav Seselj, after the incident in the Serbian parliament. The visit was initially planned for two days.

“This is a limit that we cannot cross because it is unacceptable,” said Croatian Parliament President Goran Jandrokovic. “We are leaving Belgrade.”

The radicals said in a statement that Seselj pulled down the flag at the entrance to parliament and trampled it with another party member before yelling at the Croatian delegation inside.

“We didn’t know what happened, but we could hear Seselj screaming,” said Jandrokovic after his return to Zagreb.

Seselj, a member of the Serbian parliament, remains vacant as he had already served almost 12 years in jail during his trial before the tribunal in The Hague, Netherlands.

Relations between Serbia and Croatia are still strained after the Serbian-Croatian war broke out in 1992-95 when Croatia declared its independence from former Yugoslavia.

Serbian President Aleksandar Vucic, an ally of Seselj during the war but who now says he wants Serbia to join the European Union and forge regional cooperation, said Seselj’s behavior was “inadmissible” and “sends a bad message”.

Croatian President described Seselj’s actions as “a war criminal who has been sentenced to run amok”, while the government in Zagreb described it as “uncivilized and inadmissible”.

Liberal MPs in the Serbian parliament have demanded that the authorities remove Seselj from his parliamentary seat on charges of war crimes, which has sparked threats and insults from the far-right Serbian leader.

REJECTED MASKS THREATEN AN ECOLOGICAL DISASTER! On the exit of a manufacturing facility in Prokuplje, the issue grew to become larger than the crown / PHOTO /