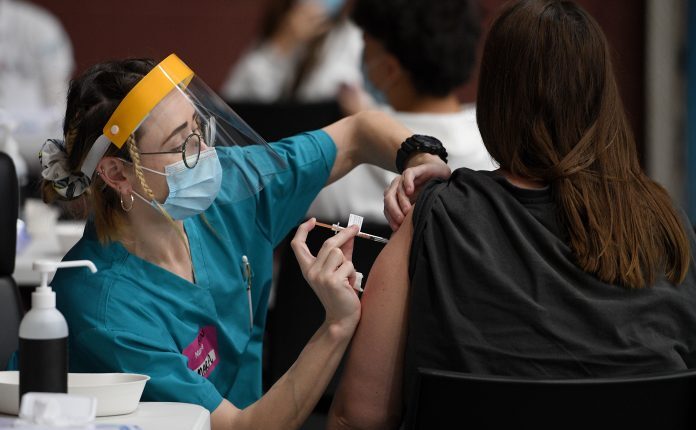 Day by day, Australia is moving towards the set goal of reaching the rate of 80 percent of the vaccinated population, which has the right to immunization against kovid. Currently leading among the states is NSW, which crossed 40 percent of the revaccinated on Saturday, and over 72 percent of people in that state received at least one dose.

However, a warning is already arriving that everyone who was vaccinated at the beginning of the year must receive a booster, ie booster dose, as soon as possible, because the effect of the initial double dose subsides.

One of the leading private health care providers, Catholic Health Australia, says doctors and nurses, who were vaccinated earlier this year, are now at risk of being “clay pigeons” for the virus unless the federal government launches a booster dose vaccination program soon.

The institution recently wrote to the Prime Minister and the Minister of Health, urging the Government to start giving booster doses in October. It is also noted that the Australian Technical Advisory Group on Immunization (ATAGI) must urgently issue a recommendation for so-called enhancers.

The federal government has ordered 85 million doses of vaccines from manufacturers Pfizer and Moderna, a good portion of which will be used as third doses in 2022. So far, slightly more than 20 million doses have been given in Australia, while about 38% of Australians over the age of 16 have been fully vaccinated.

Catholic Health Australia director James Kemp said that in the current situation with the immunization program and the growth of the epidemic, we should keep in mind that “the immunity crisis is waiting for us around the corner.”

– There is strong evidence that immunity against the delta variant of the virus in two doses of the vaccine almost completely disappears after eight months. So those who were vaccinated in February can be exposed to the virus as early as October. That means that doctors, nurses and employees in institutions for the care of the elderly can become endangered within two months – said Kemp.

– We have provided 80 million or more doses for next year – Morrison said for the radio station 4CA from Cairns.

England and Israel as examples

Last month, the United Kingdom considered launching a program to give a third dose of the kovid vaccine, and Israel is already widely offering a third dose of Pfizer, as some research has shown that the effectiveness of the vaccine has weakened over time.

However, an expert on vaccines and infectious diseases, Professor Robert Buj, said that research published in medical journals, including “Nature” and “Science”, showed that for many people, immunity is long-lasting.

– It is very clear that some people have a high level of protection even a year after vaccination – says Buj.

He stressed, however, that booster vaccination is likely to be necessary, especially for vulnerable categories of people, including the elderly, people with chronic health conditions, members of indigenous peoples, as well as health workers.

Of the 25 million doses of Modern vaccines provided by the government, 15 million will be booster vaccines to be used next year.

The government also signed an agreement with Pfizer for an additional 60 million doses for next year and 25 million for 2023, in addition to the 40 million agreed for delivery this year, a spokeswoman for the Ministry of Health said.

The big order of Pfizer for Australia is not surprising, having in mind the statement of the first man of this company.

As early as April this year, Pfizer CEO Albert Burla said that recipients of the vaccine from this manufacturer, “will probably need a third dose between six and 12 months after complete vaccination.” This will be followed by an annual vaccination, as is the case with seasonal flu.

The effectiveness of some vaccines is likely to fall below 50 percent within a year of receiving it, according to a new study by the Association of Australian Immunization Experts. Also, the spread of the delta variant of kovid is expected to accelerate the weakening of the immunity created by the initial doses.

However, protection against serious illness and death is expected to remain strong for a long time to come, although this assessment comes with a great deal of uncertainty.

For example, the Pfizer vaccine dropped from 91 percent efficacy to 84 percent during the first six months. The data from the Israeli study are even more worrying, because they showed a drop in efficiency from 95% to only 39% between January and July this year.

And immunity plays a role

Professor Fiona Russell, a vaccine expert at the University of Melbourne, called for caution regarding the study’s conclusions, which rely on a model of declining vaccine efficacy, rather than on specific data.

– It is generally known that every vaccine we receive has a declining level of antibodies. But that does not mean that we will suddenly be able to be infected. Our antibodies are also important, as well as other parts of the human immune system that should be taken into account when talking about the decline in the effectiveness of vaccines – said Russell and stressed that “until we know 100 percent whether booster doses are really needed, we should not give them away, ”especially since Australia is currently short of vaccines.

THE SUN IS SMILING TO US! Right here is what sort of climate awaits us tomorrow!